We stayed in Houston this weekend. This is only the second weekend we have not gone back 'home' since we came here in February (and the last time was because we had already been in twice that week) It is a good 2 1/2 -3 hour drive each way so it does get old after awhile. Anyway - since we didn't go home, we took a Sunday drive and ended up on Galveston Island. It was the first time I have been in about 7 years and the first time hubby has been since he was helping evacuate people prior to Rita. We just drove around the island to see how things looked. We did stop here - all the pictures I took were at this one point. 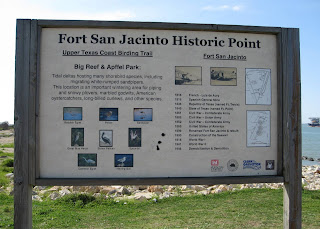 There were quite a few people on the beaches and in the water (although not at this point - they were fishing, but not in the water here) and there were some businesses open (it was Easter Sunday so I'm sure there are actually more things open than what we saw) 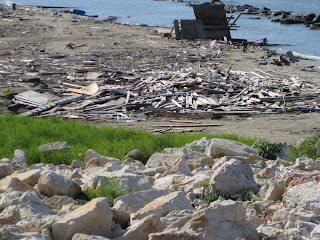 There is still a lot of work to be done. Some places it was hard to tell if they were repairing or just clearing debris. It is a pretty sad sight. 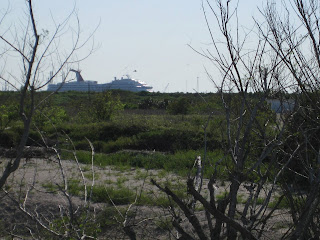 While we were standing there, we spotted this in the distance - of course you could tell it was a Carnival ship right away 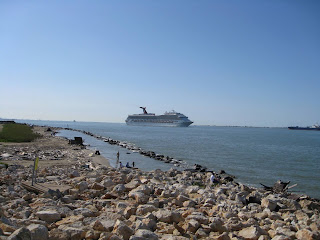 so we waited to see which one it was 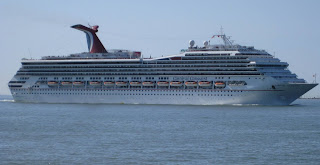 Look - it is the Conquest! Our one and only (so far) cruise was for our 25th anniversary and this is the ship we were on! (it was sailing out of New Orleans at that time)
I thought since we were staying here over the weekend I would get caught up on blog reading, but nope. I didn't even check email until last night and I am once again 200+ behind on blog posts. Oh well - I'll get there, eventually!
Hope you had a great weekend!

I knew it was still pretty bad down there, but like everything else, that is at first a big deal, everyone forgets and moves on... so sad.