A change of plans

So what were your plans for the day? Mine were to do laundry, clean the bathroom, dust - you know, those fun things. Mind you the cleaning part doesn't take long when you are in a one bedroom apartment, but I had a good bit of laundry to get done. Since I wasn't planning on going anywhere I was taking my time getting myself ready for the day - when I went to get dressed I discovered we had NO WATER! Argh. Kinda hard to do laundry w/o water! I walked down to the office and was told it would be off (the entire complex was off) for at least a couple of hours. At this point I did the only thing a reasonable person could do - threw on some make-up and went shopping! Mostly looking but I did pick up a couple more boxes so I could work on a project I started a couple of weeks ago. I spent two days moving pictures from this box 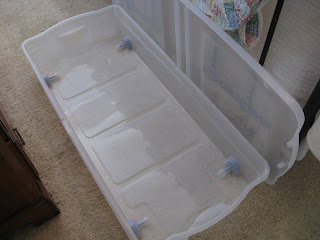 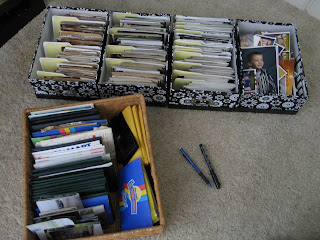 That plastic box was at overflow status - and that is probably only about 1/3 of the pictures I need to go through. At the moment I am just getting them in order by year. The wicker container has pictures that have no real clue as to when they were taken but since I can narrow most of them down to within a couple of years, I'll go back through them when I finish the others and should be able to get pretty close by finding similar pictures. My goal is to eventually get them all into albums but I still have a long way to go. I still have pictures at home that I haven't brought back with me - I figured I had enough to get a good start with that one box! Once I get them all grouped in years, I'll try to get them in order by month - or as close as possible - before I start putting them in albums. I also have one full box of just play photos from Jason's high school plays - they aren't in any kind of order either! I was pretty good at making notes on the back as they were developed when I only had one kiddo - by the time #2 came along - and started walking at 9 months - I was doing good to get the pictures taken in the first place. That was one busy child! (he still is!)

Well - I suppose I should at least go wash the coffee pot since I hadn't even done that when the water went off.

Have a great weekend!
Posted by TinaTx at 2:09 PM

Tina, looks and sounds like you were very productive! What a wonderful idea for me too, since I have all of my pics just thrown in a similar, but taller rubbermaid container...horrors!

Well, when given lemons, make lemonade. And that's just what you did. I need to get my photos in better order too.
Brenda