We left Minneapolis Wednesday morning. Again, the hubby thought it a good idea to take a scenic route - nothing wrong with that, just a long trip in front of us and this route took us across to Wisconsin rather than down to Iowa. Anywho - it was pretty and we likely won't ever be back that way. We stopped and he took some pics. 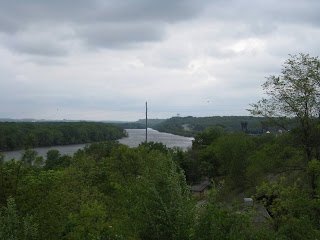 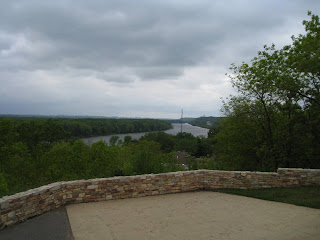 Back on the road again - once we made it into Iowa (at least I think that is where this was taken) Someone pulled over on the interstate to take pictures again.

For some reason, hubby is fascinated with these windmills. Yes, they are HUGE - but we also have them in Texas! (see the trees? they look like bushes but they are actually large trees) # 1 looked it up on the way up and I think he said they are 26 stories tall. This was taken in the middle of the day - as you can see, the sky doesn't look too friendly. We kept getting weather reports on the radio about thunderstorm and flood warnings but that doesn't do you a whole lot of good when you don't know what county you are in! Fortunately we only encountered light to moderate rain most of the trip. We were trying to make it to Kansas City before stopping for the night and that is where we hit a wall of falling water! Probably not 5 miles from where we were going to stop for the night and the 'bottom fell out'. (if that isn't a phrase you use where you live, it means it was raining so hard you could barely see your hand in front of your face! We were down to maybe 15mph and still could barely see the front of the car, much less anything in front of us) 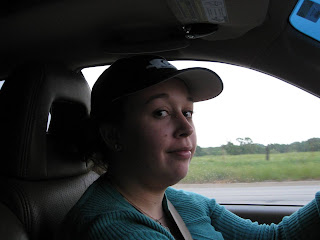 The weather was better on Thursday. Somewhere along the way hubby turned the car over to Ashley and she drove us back into Texas.
Approx 2500 miles in a week. That is a lot of time on the road! Since I've already shown pics of graduation this is the end of the travel pics except for one of the stitching I did while on the road (haven't taken a pic of it yet)
I've been working on a few things since we got home - if I ever actually finish anything I'll share some pics of those projects with you. Guess I should get up out of this chair and get busy if I want to finish anything!
Posted by TinaTx at 11:01 AM

I am enjoying your posts. I love the yellow pics..they look like antique postcards. :) Terry in Arlington

Oh goodness - going to Wisconsin - not Iowa! Wow, makes for a long trip! Glad that you're back safe and sound now!