A long and winding road

During my little blog break we went on a trip. A long trip. We went to Minnesota to pick up baby boy's bride and bring her back to Texas. If you were reading here last year you might remember they went up with a U-haul, plus two vehicles (ours and theirs). They came back with only what would fit in the two vehicles (including a desk that used to belong to hubby's dad - more on that later) They will be moving to New York in August with what they can take on the plane and in a few boxes they will ship.
Anyway - we left here on Thursday evening and spent two nights with my parents before leaving for Minnesota on Saturday. We went through Tyler and picked up #1 son - he went with us and stayed to drive back with baby boy so he wouldn't have to drive the whole trip by himself. Instead of going the 'fastest route' like we did last time (when we were pulling a trailer) we took a scenic route the first day. It was a pretty drive but not a lot of places to pull over and take pics. Two lane roads with lots of curves and a lot of them had rock on one side and nothing but a big drop-off on the other side. There was one place we pulled over where hubby and #1 got out and took this pic. (I think this was in Missouri) Let me just take a minute here to say, it has been flip flop weather in Texas for quite some time. In fact our afternoons have been hot. Nice mornings but hot in the afternoon. Before we made it half-way through the first day, I had been in the suitcase looking for socks and tennis shoes. Thank goodness I took them or I would have been shoe shopping). I usually try to remember to take a jacket if we are going to be in the car a lot because I usually end up getting cold. I wore that ratty jacket A LOT - and not just in the car!
Anyway, we spent the night in Kansas City, Mo., then on day two (Mother's Day) we hadn't gone far when the GPS routed us around some heavy traffic and we came across this. 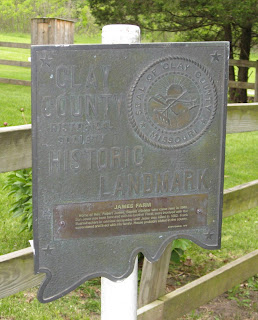 The James Farm (as in Jesse James)
Somewhere along the way, legend has it, hubby's family supposedly crosses the James family. Not sure how exactly (his grandmother was a James) but we took a detour for a look-see at the farm.
No pictures were allowed inside the museum or home but here are a few from outside. 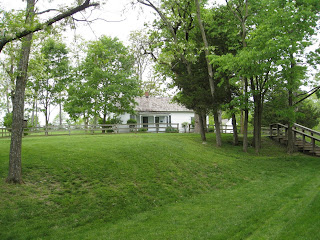 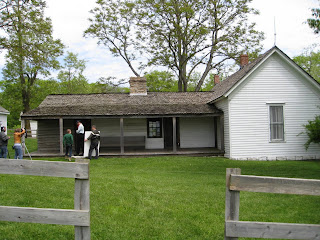 The shorter side was the original house and the 'tall' side was a later addition. There was a film crew there that day - not sure what they were filming, but it looked like some kind of documentary or something. 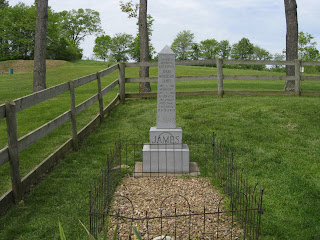 Jesse's mother had him buried where she could see his grave from her bed. 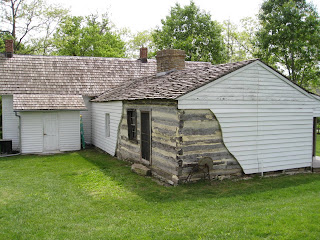 When the home was restored, they left off part of the siding to show the original logs. There is also a spot inside where they left the logs exposed. Not sure about the little building behind the house - looks like a storage building but I don't remember if the guide said anything about that or not. 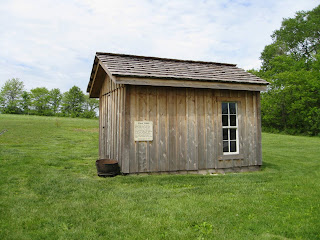 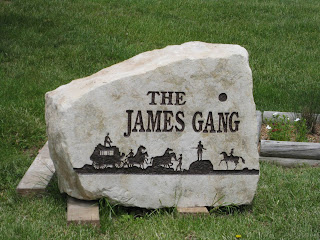 After that two-plus hour detour, which took us to around noon, we drove the rest of the way to Minneapolis and made it there around 7:30ish. It was NOT flip-flop weather in Minnesota. The farther north we got, the colder it got. It didn't get warm again until we made our last stop in Oklahoma on the way home!
I will show you what we did in Minneapolis in my next post.
Hope you are having a great weekend.
Posted by TinaTx at 10:47 AM

How Cool! I just watched a documentary about The James Gang last night - some TLC about gunfighters. That's a fascinating (and dangerous) time of our country's history.

Did those drop offs scare you to death?

Thank you for taking us on tour of the James Farm with you. Very interesting, and I especially enjoyed reading the epitaph on Jessie's head stone. Looks/sounds like y'all had a good, though tiring trip.
Love your new patio. The yellow color with your white wicker is such a bright, clean look. Y'all enjoy it.

Can't tell you the number of times I've left Texas in shorts and flip flops, only to exit the car in cold, windy Oklahoma weather. Now I always keep a jacket handy!