Back to the laundry room 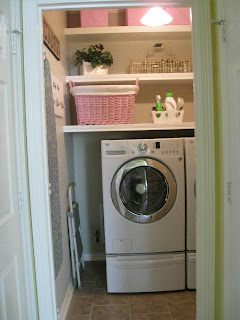 This is where we left off in the laundry room. Finished except for the door. I didn't want to put the same door back up because (since we raised the washer) when you open the washer door it would hit the doorknob and I didn't want to end up cracking the glass. 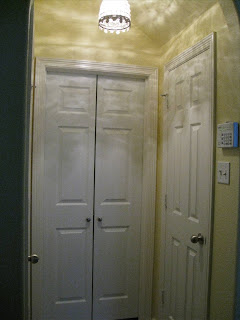 So we bought a set of bi-fold doors and took them apart so we could use them as 'French' doors. 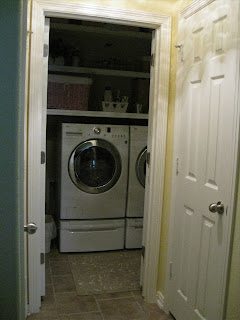 Personally, I was okay with no door - this is how it stays 95% of the time anyway. I used to keep the door closed as much as possible because it was just ugly, but now I don't mind the door being open - makes it easier to hear them ding when they are finished. However, there are those rare times that the washer and/or dryer is going in the evening and it can sometimes make it hard to hear the television so hubby wanted a door, so doors it is. 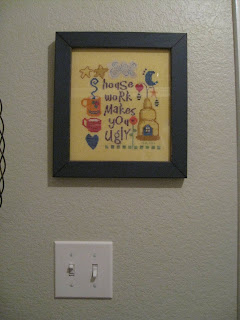 There is just one little problem with the doors 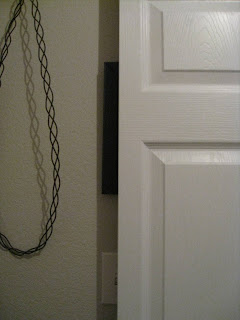 When they are open (remember 95% of the time!) this side covers both the light switch and the cross stitch I have hanging there. The switch on the left was the fan/vent switch (which I never use) and the one on the right (behind the open door) was the light switch. Hubby switched those around the other day so now I don't have to move the door to turn the light on. Now if I can just decide where to move that cross stitch piece to we can finally stick a fork in the laundry room and call her done!

Have a great weekend!
Posted by TinaTx at 2:21 PM

It looks great Tina. Move the xstitch to the shelf and put it on an easel if small enough or underneath the board with the hooks (although if you hang something there you won't see it. I'd go with the easel thing, stick a fork in it and call it done! 'o)

Looks great, Tina, door or no door...BUT we do need to see that cute cross stitching!

I just saw your kitchen and boy does that hardware make a difference! I am in the process of changing my hardware..to get ready of the brassy brass! Yours is just perfect as is the extra lighting!!

Funny, you said you weren't a stainless steel person, well don't count yourself alone, neither am I. I much prefer black appliances and that is what I have. Except for my microwave which is white. I just hate to buy a new one, as long as that one is doing the job, you know?

Have a great weekend!

Hey guess what - I am not a stainless person either - too many fingerprints - would drive me crazy. Love your laundry room makeover - do you like your front loading machine?? I have heard pros and cons on these. I just sent you a note - package arrived today - Friday the 13th - can you believe that!! Thanks again.

Your house is looking so good! You have been so busy in the last few months...it's been good to catch up on your blog.