I was beginning to think we might never see the sun again, but I think it is trying to sneak out! I guess even if it only has a couple of hours before dark, that is better than nothing! I can still see a lot of clouds so I'm not going to get too excited yet.

Okay - so what was I up to on Friday. I thought I might try to spiff up this plain gray sweatshirt. (no before pic - just a plain gray sweatshirt) Sounds easy enough, right? I've done a (tiny) bit of applique but what I've done was mostly straight lines or large curves and it has all been on small pieces of fabric. (dish towels, pillow tops) So anyway, with my bright idea I cut out and ironed the flowers on, then sat down with Bertha to do the stitching around the edges. First, as I said, I haven't had much practice - and second it has been awhile since I have done any at all so we won't be showing close-ups of this project.

Anyway - here is what I did. 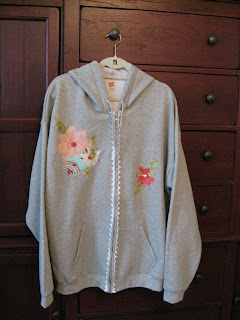 I added some rick-rack down the front along with a few flowers. 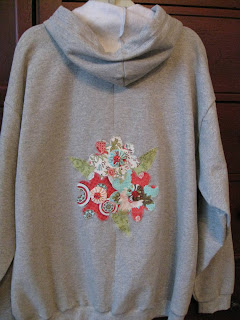 Then I put some flowers on the back. I made about a dozen yo-yos before I finally got the hang of it. (and will probably have to start from scratch by the next time I do any!) They were starting to get kinda fun though. Anywho - after I got it all ironed on I decided that I had the flowers on the back too low, but I wasn't going to try to change it - I'll just have to try to do better next time. Next time won't be anytime soon!

I did learn a few things that hopefully will make for a better outcome should I ever decide to try this again. Next time I will work on placement with the garment hanging instead of laying flat on the work table. (the hood came way lower on the back when it was laying flat - which is why the flowers on the back are so low). Straighter lines or larger curves would be much easier. Sweatshirt fabric is rather stretchy when trying to sew on it and trying to sew on a sweatshirt - especially when trying to constantly turn it - is kind of like wrestling with an octopus! So, while it didn't turn out as well as I had hoped, it is only for me so we will call it good enough for now.
Posted by TinaTx at 3:32 PM

I think you did a very good job - yo yo's are addicting - love to make them. I have that same plain gray sweatshirt hanging in the closet - think I need to jazz it up abit!

I love the fabrics you used for this---so cute! I know what you mean about trying to get things hanging right on a sweatshirt or t-shirt, though. I also always seem to get things too low myself...

I want to learn to do yo-yos! Cute project! We also got some sun today! (just for a short while) Terry

So! That was what you've been up to last week :-) Hey, I think it's lovely. Don't think I'll be able to make it half as nice.

Very cute. That looks like a lot of work. Good job!