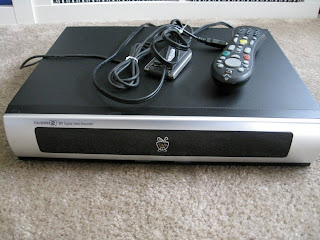 Harvey has been a faithful servant for several years. Now, due to circumstances beyond his control, he has been rendered obsolete. Meaning due to 'upgrades' by the cable company he is no longer compatible. :( I am now 'stuck' with a dvr from the cable company and a remote I have no idea how to operate. At least the hubby already had the tv on when I got up this morning. I fear if I turn it off I may never get it back on! I hate upgrading electronics. I'm an old dog - it takes me awhile to learn new tricks. I'm still trying to figure out the iPod thingie and now I have to learn a whole new way to operate the television!

At least we have some of this for a change! 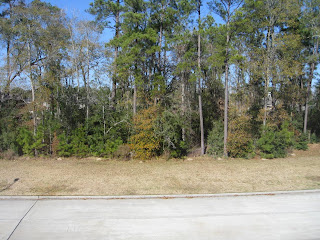 Sunshine! (taken out my office/sewing room window) It is so nice to see the sun again! I hope it stays around awhile but the weather man says we will see rain again on the weekend.

I did get some stitching done over the weekend - I'll try to get a pic of that for the next post. (I didn't finish anything but I did make a little progress!) I'm once again way behind on blog reading and answering email. I'll catch up. Eventually.

Hope you have sunshine where you are!
Posted by TinaTx at 11:22 AM

Goodbye to Harvey. I'm sorry for your loss. I'm glad he had a good long life. He was loved until his time.

No sun for Atlanta today. But lots of rain just assures a most beautiful spring to look forward to.

I look forward to your stitching pic.

Have fun soaking up the sunshine!

I agree..I hate upgrading or changing anything electronic. I have a page of written instructions for one of the tvs. Terry