Since it is so hot these days, we took in some indoor entertainment this weekend! We went back to Kilgore to the Texas Shakespeare Festival. Saturday we saw the children's show - Aesop's Fables and Sunday we saw The Taming of the Shrew.

Of course you can't take pics during the shows, but after the children's show the actors came out and signed autographs for the kids. (the kids were lovin that!) 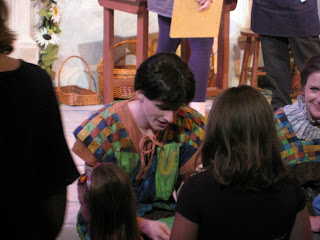 Here is baby boy signing autographs after the show. 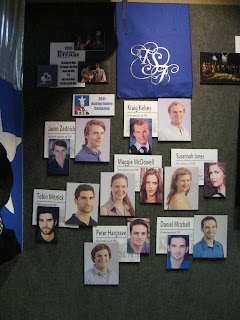 I seriously don't know what is wrong with blogger and pictures. I cropped this pic to just show baby boy's head shot but it loaded the un-edited picture. Since it is showing all the interns - the guy right under Jason was playing his twin brother which is why Jason is sporting that fine black wig. 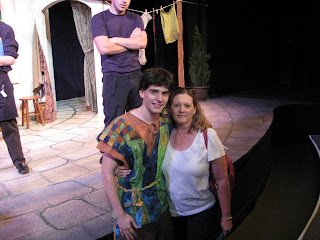 This is something you won't see much - I got a wild hair and decided I wanted to take my pic with baby boy. I usually stay as far away from the front of the camera as I possibly can. Anyway - it was kinda rushed because they had to change the set for the next show but hubby snapped this one. Again - I cropped this pic but it loaded the unedited version and I don't think it is worth the headache to try and figure it out at the moment.

This is the last week for TSF so if you haven't been there is still time!

After the festival closes the kids are going to spend a few days visiting friends and family before making their way here then we will have all four of them here for a couple of days before J&A head back for NY. It has been a year since they were all here at the same time so I'm really looking forward to it!

Guess I should get back to catching up on those things that don't get done when you spend the weekend out and about!
Posted by TinaTx at 12:08 PM

Has your hair gotten a lot longer? You look great!!!!!! Neat photos of the play weekend.