I'm still working on the projects I showed yesterday. I hope to finish those and the one in the garage over the weekend. Will I have started another before I get back here on Monday?

Here are a couple of pics of the 'garage project' 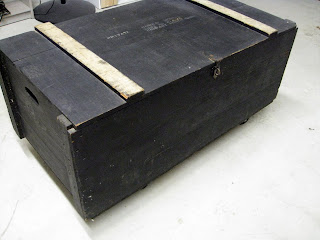 I have no idea where this trunk spent the last 60+ years. (it belonged to hubby's dad, we found it when cleaning out the garage after his mother sold her house) We have had it for the past 3 and it has been in our garage since we moved here. In the past it was likely stored in a basement or barn. 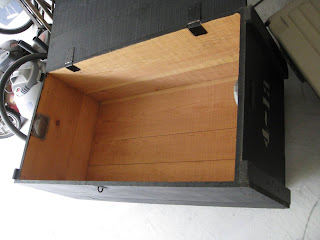 I'm not sure if I took this pic of the inside before or after I started sanding - you really can't tell much difference just by looking anyway, but you can feel the difference! I would have sanded it more but I was out of sandpaper so I called it good enough. It was pretty smelly (musty?) too so I sprayed it with some odor removing stuff I found at Lowe's before and after I sanded then coated the inside with 3 coats of Polycrylic. Hopefully that keep it from starting to smell again when it comes inside and is closed. I'm working on getting the poly on the outside - I'm really glad I did the inside first since the black is coming off when I put the first coat on and my once 'milky white' poly is now a nasty gray color. (doesn't matter on the black part but might not have looked so good on the inside!)

What will go in it remains in debate, but it will be going in the game room to be used as a coffee table. (I just hope it doesn't 'grow' between the garage and game room. You know how things look so much larger when you get them inside and that room is about full now)

Well, now you know what I will be up to for the weekend, what will you be up to? We are supposed to have nice weather so that's a good thing!
Posted by TinaTx at 1:58 PM

Thats a really great project and will be the perfect coffee table in your game room :)