I try to keep my posts here positive and somewhat stitching/crafting/fun related (and there is some of that farther down if you want to skip this first part) but for the third time in as many months, we have lost a family member. My mother and my niece, Heather, both in April and last weekend, my sister-in-law (Heather's mother - my brother's wife). She had been fighting cancer for quite awhile but the end came sooner than any of us anticipated. She was at home and my brother was with her. Those of you that know me outside of this blog already know this and I debated whether to post about it or not but I have 10+ years of life documented here so here I am.

While I'm at it,  I have shared so many moments with Jason and Ashley, I might as well share this. After a lengthy separation, they have decided to end their marriage. Ashley has moved back to Texas and Jason remains in New York. They remain friends and while it changes the dynamic of our family, Ashley is, and always will be, a part of it.

Now that we have that out of the way, lets move on to some fun stuff! 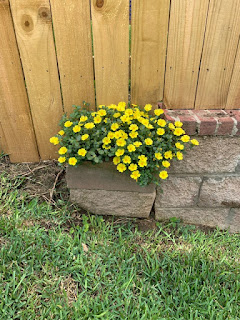 When we had the fence rebuilt we moved it back a bit and went across the top of the retainer wall which exposed this block that would not budge so I planted some flowers in it. They seem to like it there! 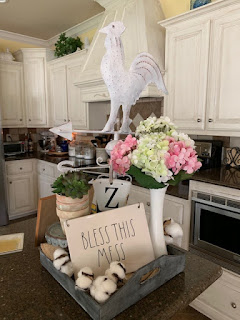 I put the patriotic decor away and this is my rooster for the next month or so - whenever I get around to putting out fall stuff. It's way too hot to think about fall decor yet! 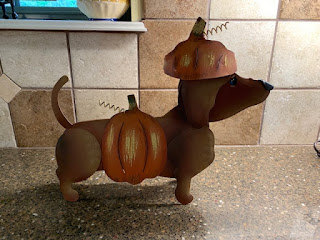 With that said, here is my first fall decor! LOL This was a birthday gift - isn't she cute! The pumpkins can be changed out for other seasons but I couldn't find anything summery so she will be wearing pumpkins for now. Just couldn't bring myself to put it away until fall. 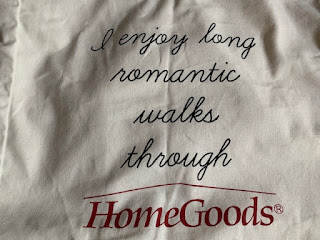 My sister gave me this tote bag - excuse the wrinkles. 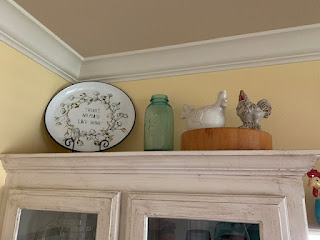 That round tray was in the tote bag. I tried to get a picture where you could read it but without dragging out a ladder this was the best I could do. (There's no place like home) 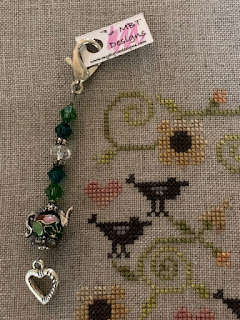 I also was gifted this scissor fob - haven't decided what pair of scissors to use it on yet. 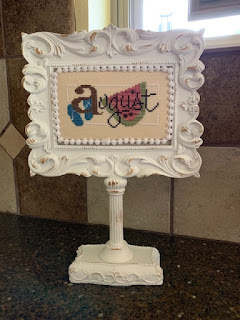 Put out my August monthly pieces 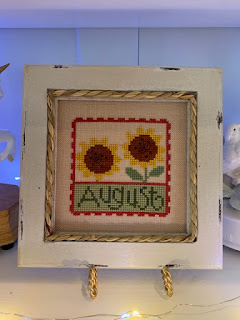 And yes, I did center this one after I took the photo - I didn't realize it was too far to the right until after.

That's it for now. I do hope my next post is all about fun.

Both August pieces are adorable! What flowers did you plant in that spot. They look like they are thriving. Love the pumpkin dog! Tina, I am sorry about your SIL's passing. Lifting your family up in thought and prayer.

Love it all, especially that punkin’ head! I don’t know if I can ever absorb all that has happened recently. Hug.