Shopping in the garage

In the never ending effort to clear out some 'stuff' in the garage, I went shopping out there today. I brought in some old 'soda' crates and put them up on top of the kitchen cabinets. I may have mentioned before that hubby's grandfather (and then his parents) had a little grocery store. Hubby worked there while growing up (along with many of his friends but we won't get into those stories here!) Anyway - we ended up with these three. 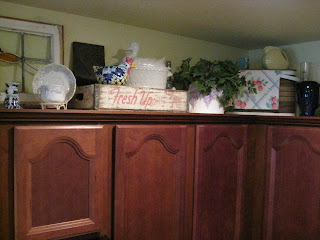 They are so 'used' you can barely read parts of it. This one is a '7UP' crate. It was divided up for individual bottles so it was easy to just sit stuff on top of it. 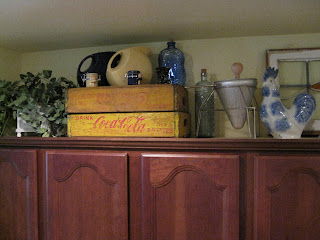 The two 'Coca Cola' boxes are divided for 6 packs so I turned one upside down and stacked them so I could put some stuff on top of them. That is the 'good' side of the one that is upside down! I see these things all over for sale - many in much better shape, but I like knowing where these came from. Still not totally happy with the arrangement up there, but I'll figure it out eventually. I don't climb up there and move stuff often - but I think about it a lot!
Posted by TinaTx at 4:50 PM

Oh I love it, Tina! Those old crates look awesome!

I do the same thing on top of my cabinets,except yours is better than mine ;) I have old mason jars and pip berries with roosters scattered around....