I can't remember if I told you that we were going to have a patio built on the back of our house. I might not have mentioned it because it had to be approved by the HOA first. Anyway - last week we finally got our approval. Monday evening (like 7:00pm!) we got a call saying they were going to come pour concrete Tuesday morning. Tuesday was the only day we couldn't be here so hubby told them it would have to wait. (we left here at 6:30am and didn't get home until 10:00pm on Tuesday - most of that was spent on the road so we were both beat!) When hubby talked to the contractor he said he would call on Wednesday to let us know when they would be out - probably Thursday or Friday. That meant I could have Wednesday to do some errands. So, when I left the back of the house looked like this. 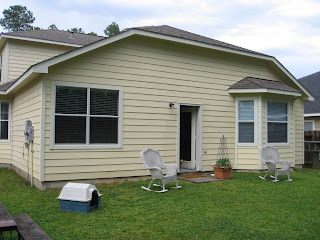 I think hubby actually took this picture on Sunday.
Anywho - I came home a couple of hours later to a backyard full of workers! We had no idea they were going to show up on Wednesday - of course that kind of put the rest of my day out of whack.
This is what we had when they left on Wednesday. 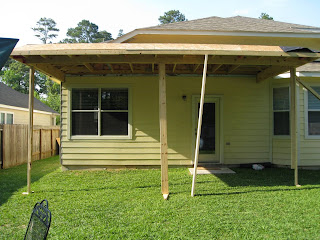 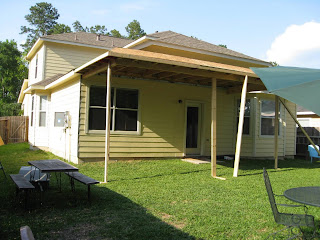 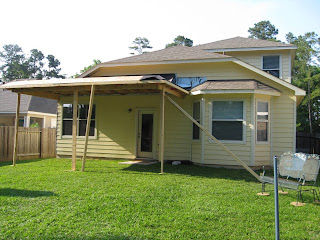 They came back yesterday to trim out and put the shingles on but being as I am a short person and you can't really see much from the ground I didn't take any more pictures last night.
As I type this, they are pouring concrete! I have no idea if they work on Saturdays or if it will be Monday before they come back to work on the cover again. They still have to set posts and do electrical. We will have a couple of can lights and a ceiling fan. We are also replacing the back door. That is kinda what started the whole patio thing - there is some rotting on the door and frame from water bouncing off that 'patio' so we knew we had to replace the door but it was senseless if it wasn't going to be covered since it would just do the same thing again. Same door except this time it will have blinds between the glass. We debated on half or full glass but since there is carpet in that room I don't want a doggie door there and Autumn loves to look out the window so we ordered the full glass. (who knew they only keep the half glass in stock - two weeks to get the full glass!)

So there ya go - just a little more chaos to add to the week.

ps - the dog is going nuts - not only are there strange people in the back yard, she can't go outside to check them out!
Posted by TinaTx at 10:35 AM

Wow, you really have no say in when you'll get your patio! But I bet y'all will just love it.

You will enjoy that so much! Your new man is too funny! Terry in Arlington

Looking good. I am so glad we have our covered patio. We had to order our full window door too!

You will love it! Nothing better than having a place outside to go to for sanctuary. Keep us updated on the progress!