We did a little planting around here over the weekend. While we are grateful for all the rain we have had this year it has made for an over-abundance of mosquitoes and I'm still itching! 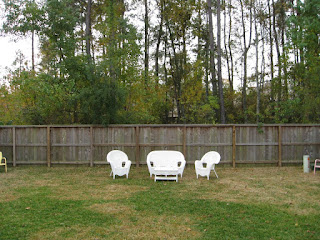 First - here is a picture from when we first moved in. The white furniture is now on the back porch. As you can see, we didn't have anything to work with. 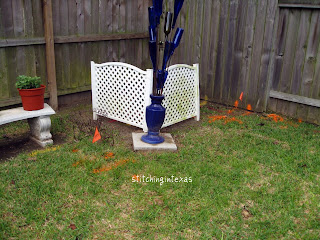 This is/was my feeble attempt to hide the utilities in the back corner. All of our utilities are underground, which makes for a nice look in the neighborhood but makes landscaping a challenge since they are buried right along the fence line - all the way around the back yard. (You can see we had the utilities marked before we did anything - drew it off on paper so hopefully we can come up with some kind of plan before next summer) 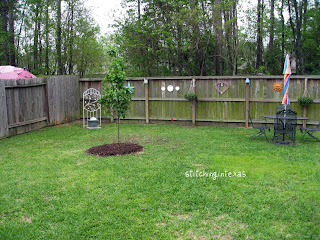 Still a long way to go, but we started by planting trees 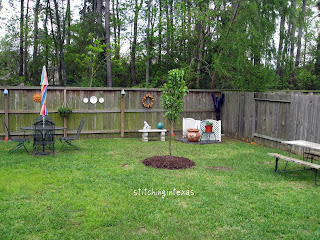 and trying to find a better way to hide the utilities. I will plant something in the big pot - maybe a hydrangea, but right now it is still empty. (and I'll add some more pots along the way too) I did plant some vincas in the little planter on the left of the big pot (you might be able to see it if you enlarge the picture, but it is a little rusty wire wheelbarrow) The pictures aren't great - it was getting late on Sunday when I took them and by the time I got through running errands Monday the weather was already starting to turn so I didn't get back out there. We had a lot of wind and rain yesterday and it is still cloudy today so new pictures will have to wait. (but the trees are still standing!) 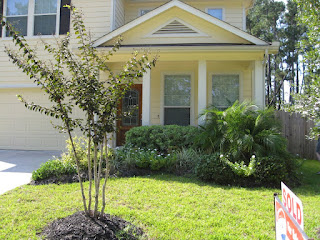 This is the front of the house when we bought it. I don't think the former owner cared much about the yard or flowerbeds. I think what was here is probably what was put in when the house was built. We weren't sure the crepe myrtle was going to make it (you can't really see in the picture, but most of the leaves are black!) The palm thingie bit the dust the first year we were here (we had snow!) so I gladly dug it up! (okay - the hubby actually did the digging but I supervised) 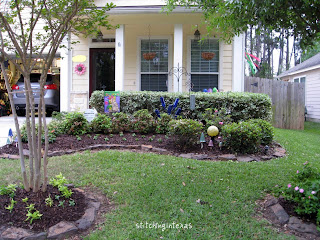 Anywho - we are slowly trying to breathe some life into the yard and flowerbeds! Last year I put plates in the flowerbed but I took them out when we did the Christmas decor - maybe I should put them back now - at least until the vincas start getting big? (ignore the junky garage - hoping to get to that soon - the door stays closed most of the time!) See how big the vincas in the bed on the right are? Those are left from last summer! They did get bit a little during the winter and I had to cut some of them back, but over half of that bed survived so I just put in a couple of new plants to fill in the gaps. I still need plants for the hanging baskets - trying to decide what I want this year. 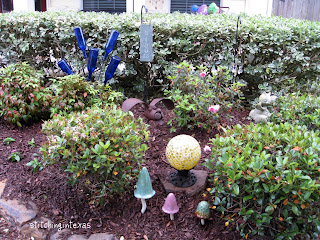 We planted another azalea where the palm used to be. The first one we put there died but we are giving it another shot. 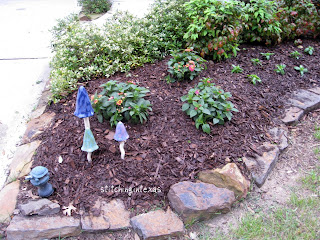 There was some kind of shrub on this corner but it was all 'leggy' and didn't seem to want to fill in so we pulled it up and put in some lantana.

What, no stitching? Nope - spent the whole weekend either in the yard or making trips back and forth trying to decide what to plant in the yard! This coming weekend is retreat weekend though so I need to pack my stitching bag!
Posted by TinaTx at 10:15 AM

ohhh lovely shots and plans of your garden .... azaleas if I remember need acidic soil may that's the problem ??
and those mushrooms look fab :) love mouse xxxxx

Your yard looks lovely! I love the blue bottles as accents! And of course you should put the plates back in, silly!

I think you are making some wonderful improvements to your yard...so much nicer!