I'm drawing a complete blank as far as titles go today - not that mine are ever witty, but I do try to come up with something!

I missed posting Friday because hubby decided at the last minute to take the day off so we spent the weekend working in the yard. (and I have the mosquito bites to prove it) Had I posted on Friday, I would have shown you this. 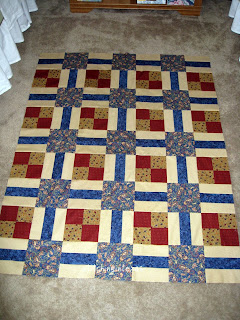 I got the blocks all sewn together. Sorry about the crappy picture - I didn't look at it until this morning and I've already put it away until I can get back to it and get the borders on.

I started cleaning up my sewing room - it's a big job! Somehow I got distracted (it happens - a lot) and thought I would clean out my little tin boxes. I have six of them (at least that is how many I found) One of them has buttons in it. The other five had a mixture of stuff. I usually throw one of the boxes in my tote bag when I go somewhere I think I might get a minute to stitch. I've moved stuff from box to box so many times they were a mess and I could no longer just pick up a box and go - I had to see what was in them. 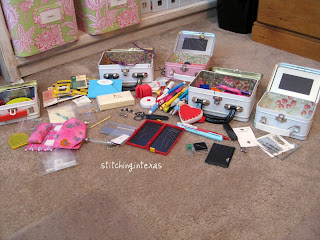 So I spread them all out on the floor to see what I had. A mess, that's what I had! 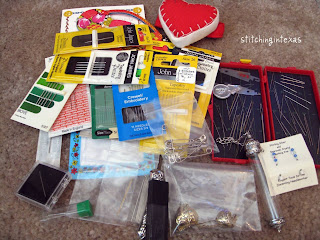 Need a needle? I've got them for quilting, embroidery, cross stitch, beading. . . 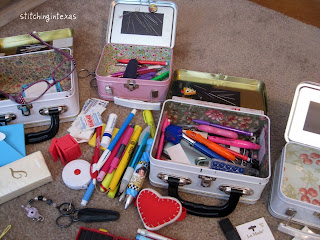 How about a highlighter? Pen, pencil?

Here is just partial list of what I had in the boxes:

Readers - somehow only one pair?
Laying tool (plus two larger needles also used as laying tools)
10 ink pens
6 pencils
8 highlighters
3 blue marking pens (I took one of the boxes to a quilting class)
eraser
Bandaids - even the tapestry needles will draw blood if you stick yourself hard enough!
Kleenex
Scissors - only 3 pair, I must be slipping!
rotary blades
lighted magnifier
2 LED lights
2 calculators
tweezers
nail clippers
3 notepads
3 (empty) needlecases - you see the pile of needles in the pic. Most of those packages are full but there were loose needles on the magnets in every box
safety pins
paper clips, binder clips
pin cushion
tape measure
rulers
etc. . .

I tried to sort it out enough to give me one box for cross stitch (retreat weekend is coming up!0 and one for quilting/applique then I filled one box with needles and the other two with misc. stuff. What do you think the odds of me getting to the retreat without something I need are?
Posted by TinaTx at 2:32 PM

You are so organized. I love your little tin boxes to take with you. Great idea!

I had to laugh out loud when I saw your list! Goodness. I can't believe you had only one pincushion and one tape measure!! Really, you are slipping ;)
I thought I had too many needles until I saw your stack LOL
I'm not very organized either but I think we've touched on that subject a time or two...so I can relate :)