Nothing pretty about these pictures but I'm going to show you them anyway. Just in case you ever need to remove an oil stain on concrete.

You know how you buy stuff wondering if it will actually work like it says it will? Well this stuff works! I should have taken a picture of the container but I didn't and it has been thrown away, but it was either Oil Spill Remover or Oil Stain Remover. We will go with OSR. We got it at Lowe's over by the paint. (obviously I'm not being compensated for this or I would take the time to make sure I had the name right!) It said it wouldn't harm pets or the environment and it had a citrus smell to it.

I should have thought to take a before picture but again, epic fail. Anywho - after we swept up all the sand (we had poured sand over the oil stain when the guys were hanging Christmas lights, then just kept adding to it when it soaked through) and poured out the first jug of OSR this is what it looked like 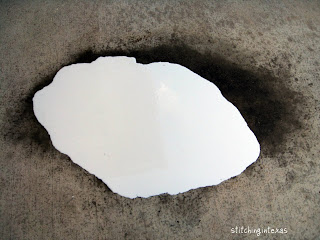 Just to kinda give you an idea of the scale - I'm guessing this stain was around 2ft x 4ft - and the worst part is covered by the OSR in this picture. Trust me, it was large and I'm sure that stuff was deep into the concrete. The mom-mobile had been leaking for a couple of years. I had given up on buying oil by the qt and started buying the 5qt jugs. Anyway - the stuff pours out kinda like weak glue. As you can see, we should have bought two jugs - one wasn't enough to cover the stain. 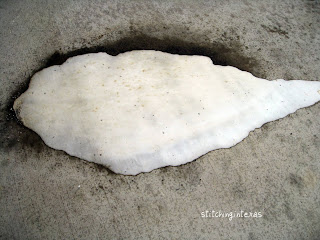 After roughly 24 hours. Our driveway has a slope so it spread a little but not too bad. You can see it was pulling the oil up. The instructions said to let it sit until it was dry then sweep up. It gave no drying time but with the mild temps and high humidity around here it took about 48-72 hours. (would probably not take so long in the heat of the summer or if it had been sunny) 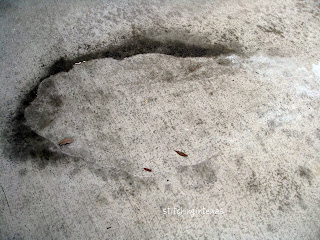 This is what was left when we swept up the first round. I would say it worked pretty good! We went back and got another jug to pour on the parts we missed the first time. 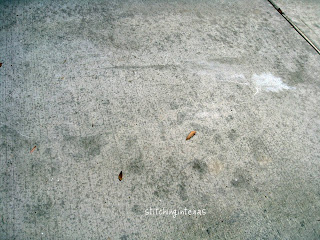 We got a little misty rain one day while the second batch was down so there were some places that weren't quite dry when we swept it up but over all I would say it was a success! Hubby took the power washer to it over the weekend and that took care of the white spot/outline that was left behind. Just water - no detergent of any kind. I didn't take another picture after he washed it down. I'm sure the neighbors think I'm a little off anyway what with me out taking pictures of the driveway!

Well - enough of that. I did some fabric cutting yesterday and now I'm going to sew some of it back together!
Posted by TinaTx at 1:11 PM

This sounds like a miracle product - I need to buy some right away - thanks for letting us know about this prodcut.