A lot to do

and very little time to do it!

Baby boy's bride called last night (late) and said they are coming today - yeah, but it means my plans for the day have changed. Had I known they were coming today, I would have gone to the grocery store yesterday (now I get to go in the rain) and I would have spent the day cleaning up the mess we made on Saturday instead of making a bigger mess that I now need to get cleaned up today. Long story - I'll get into that in a later post. I will just say in the attempt to get more organized, all the crap from my office/sewing room closet ended up in both the guest rooms and my guests might want a bed to sleep in! Why is it so hard for me to have an organized house? Oh well - I'm glad they are coming and can't wait to see them. I'll just be even more disorganized than I was last week. It's happened before, and it will certainly happen again!

Anyway - I hadn't really decided what today's post would be but I thought I had better get it in early and since I doubt I'll get to post tomorrow, I'll do my birthday post today! 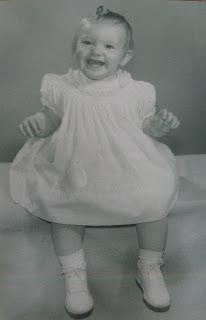 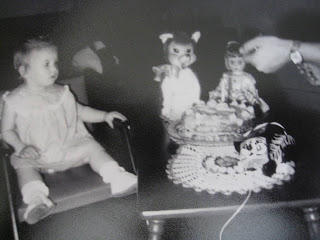 First birthday - I still have that stuffed toy and that rocking chair. Both a little worn, but then so am I. 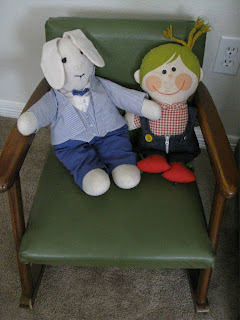 The chair used to be another color - orange, I think - and it is ready for another make-over. It has been on my list of things to do since before we moved. 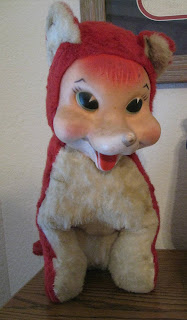 I could have saved myself a picture if I had thought to move the poor, pitiful looking stuffed animal to the chair and taken one pic instead of two. One of these days I'll get around to trying to clean his face again. I can't remember what I tried before but it didn't work. I would rather have it dirty than take the paint off. Again - on the list of things to do - eventually. Yes, it is a long list.

I hope I have a chance to do a little blog visiting this afternoon - just depends on how quickly I move. If not, I'll catch up again after the kids go back to Kilgore.

Better get moving!
Posted by TinaTx at 9:28 AM

This kind of thing ALWAYS happens to me! Planning is unheard of..lol.
Since I teach Pre-K, we have lots of dirty doll faces and bodies in the home center. I use the mr. clean sponge and it works..but it might take paint off.
You were adorable! (and still are) Happy Birthday!!!!!!! Terry

Happy Birthday. I hope that you have a great day!!!. Love those pictures of the things you saved. They're fun to look at.

Love that Dapper Dan doll - you are so funny. Trust me, the kids will not notice or care about the mess. They are young - these things do not matter to them - just relax and enjoy!! I know - easier said than done.

Love that Dapper Dan doll - you are so funny. Trust me, the kids will not notice or care about the mess. They are young - these things do not matter to them - just relax and enjoy!! I know - easier said than done.

Jappy Birthday and I love that first picture of you. It is adorable lol.