Well, I totally missed yesterday - got caught up in 'stuff' and never made it to the old blog, then I had to turn the computer off this morning and I just now turned it back on (electric was flickering and kept restarting the 'puter so I thought it best to just turn it off). We got about two and a half inches of rain!

Anyway - I showed you pictures of my just re-painted table, now I want to show you where it is because I'm not sure if I have it sitting exactly where it should be or not. 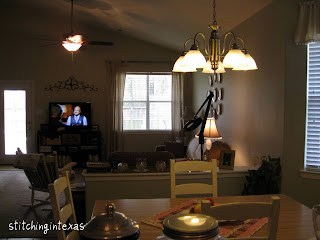 I took this standing at my kitchen sink. You can see that the table isn't actually centered under the light (though it isn't off by far and it is centered side to side) but it is pretty close to centered with the short wall that divides the breakfast room from family room. 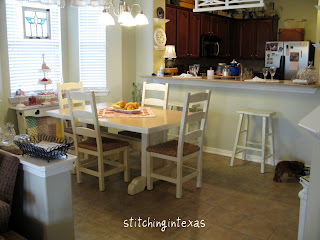 The bar/kitchen wall is longer than the wall between the breakfast room/family room. The choices I have are to leave it as is, (most likely) move the small table that is by the window and shove the table closer to the window (which would center it under the light fixture) but I'm afraid that would look like it is pushed too far over 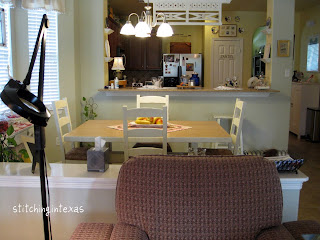 or I could center the table with the kitchen wall, but that would make it stick out into the walkway. 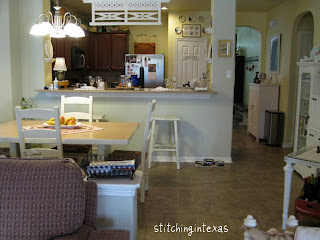 Just thought I would throw the question out there and see what other opinions would be. I honestly can't remember how the previous owner had her table but there was only a can light there at the time (we put up the light fixture after we moved in) so it wouldn't have been as noticeable. I think I would like to put an area rug under the table but would that just bring more attention to the fact that the whole room is a little odd?

I've managed to get a little stitching done, a little sewing done and a piece of applique ready to start. The applique is purely a practice piece - when we went to Galveston the other day the lady at the shop where I bought the fabric and paint was working on a piece of needle-turn applique and she made it look so easy I thought I had to try it! She suggested starting with a heart so I cut one out and tacked it to a piece of background fabric while I was w/o the computer this morning.

Have soup in the crock pot so all I need to do is make a pan of cornbread and supper will be done! As always, I'm more than a little behind on blog reading!
Posted by TinaTx at 4:25 PM

mmmm having squinted and mmmddd and ahhhhd ... i don't think there is a lot you can do .... as you say if you move the unit it will looked pushed into the window and if you move it the other way you will obstruct walk way soooo am afraid you are stuck with it ..... sorry can't be much help today ..lol and oooooo can't wait to see your stitching :) love mouse xxxx

maybe you could swag the light over a little?

Hmmm...Have you tried turning the table around? It looks like there would be enough room to do that. I think having it centered under the light is more important than having it centered with a wall....just my 2 cents worth. :)
Why don't you post pictures of it that way with side-by-side pics of the way you have it now and then maybe we can help you decide.

I vote for "swagging" the light.
Blessings,
Lorilee