Yes, it's been awhile.

Seems like I'm always busy, but I don't seem to have much to show for it.

I had a bit of a hard time deciding on a color for the kitchen. 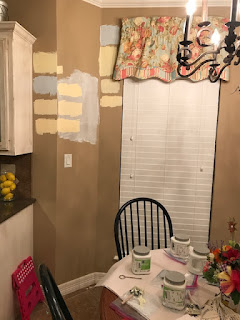 I sampled a few colors and ended up going with. . . 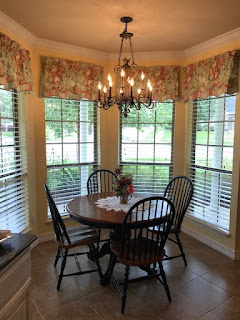 Banana Cream, which just so happens to be the same color we painted the outside of the house. 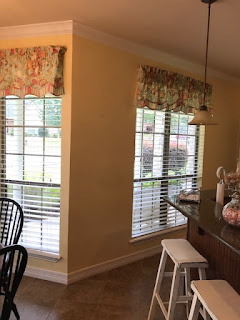 After trying the samples we thought it just looked better if we primed first so the kitchen basically has three coats of paint on the walls. I'm still planning to paint the bar/island with a blue/gray. Might work on that this weekend. 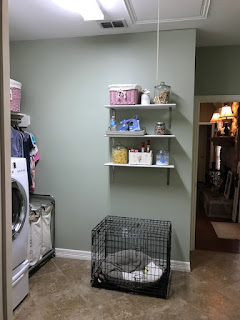 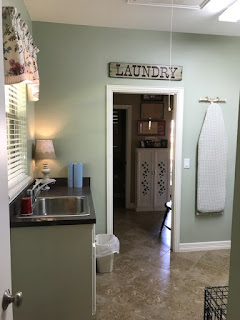 I wish I could come up with the name of this green but it isn't coming to me right now and my sample chips are in the other room. That door leads to the back entry - garage is to the left, the doorway you see is the powder room. You can see the sun coming in from the side door on the right and then the kitchen is also to the right.

Still have pictures to hang in both rooms but haven't decided what I'm going to out back up and where I'm going to put them.

Thought I had decided on a color for the living room but after I put a sample up on the wall near the ceiling I decided I didn't like the two colors together and I don't want to paint the ceiling so . . . 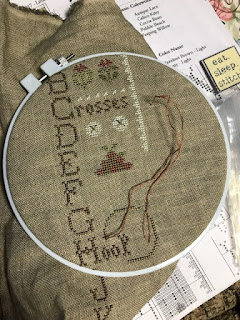 I have managed to get in a stitch here and there. Had to take out some and restitch so it's not as far along as it could be.

We had a visit from the middle kidlet a couple of weeks ago. Desktop computer crashed and he came in on a Saturday and fixed it for us. Cutest tech support around. He couldn't stay the night but we took him out for a steak dinner before he headed home.

Have a new project to start on Monday. Terry and I are going to do a little stitch-a-long.

Other than that, just more of the same old stuff.