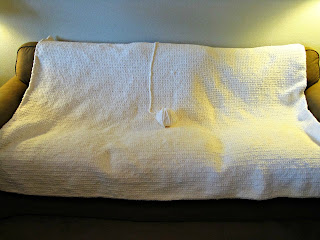 A couple of months ago I found out there was a 'fiber and yarn' group that meets at the clubhouse here in our subdivision so I thought I would give it a try - just to meet some people that I might have something in common with. It has been kind of hit and miss with the holidays but anyway - I thought it would just be people meeting to work on their own projects while visiting with each other but the first night I went they were doing a project so I went out and got the needed items for the bag they were going to make. Well, by the time the meeting was over my bag looked, well, not like a bag! I guess I should say the only thing I crochet is borders around baby blankets and I've only done a few of those. I know nothing about crochet except I like the rhythm of the hook and yarn - it reminds me of my great-grandmother. So, anyway, when I got home I knew that what I had was never going to be a bag so I took it out and went to you tube for crochet instructions thinking I might make a throw so as to not waste the skein of yarn. Found one showing the chain stitch - it said now make about 200 then come back. I didn't count mine, I just kept making them until it was pretty long. Next step was a single crochet - again she said make 200 then come back. Well, I went down my chain and turned around and started back. Seven skeins of yarn later this is what I have. I'm trying to decide if I want to buy one more or call this monster done. 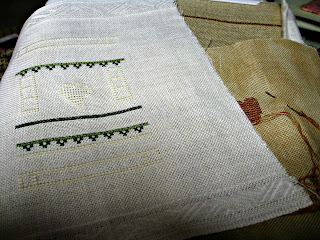 In the meantime, I have 3 cross stitch projects in various stages of unfinished at my stitching chair (we don't discuss the projects upstairs) I have them stacked because they are all gifts and I don't want to give anything away. The cream thread on the top one is silk and I'm having a hard time with it - winter hands are not really compatible with silk thread.

That's it for today - will see what kind of photos I can find for next time. I do still have some close-ups of the Christmas tree I haven't posted yet.
Posted by TinaTx at 12:32 PM 3 comments:

I don't know if I will ever get caught up. After basically taking 3 weeks 'off' (as much as a wife/mother can take 'off') I've got a lot of catching up to do.
The girlfriends and I actually got together before Christmas this year but since I haven't gotten around to showing those pics, I thought I would do that today. 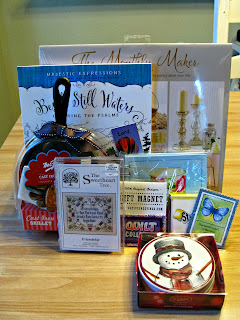 We always do the bag full of little things kinda gift exchange. We collect things all year round then sometimes we forget we bought something. :)
Anyway the photo above and the one below are my goodies from Sarah. 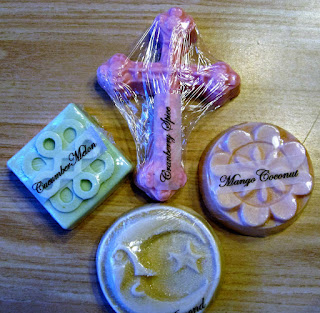 These are soaps! They smell so good but I'm afraid they might be too pretty to actually use! 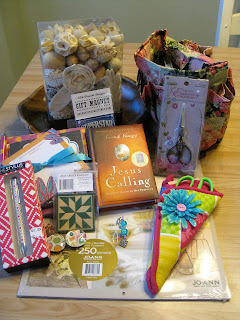 And this was my bag from Sandra. Yep - I've got two of those Joanns calendars! (lots of coupons!) They both had the same idea - I almost did the same thing, glad I didn't. 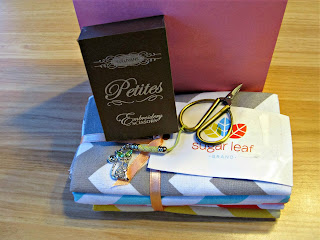 This was an extra in my bag from Sandra - it is my birthday gift (my birthday is in July) She kept forgetting it when we were going to see each other. I've been known to be a bit late on birthday gifts too - it's nice to have friends that don't mind when you are a little late!

I would be a lot closer to catching up (and maybe having some more recent photos) but we were out of town again last week. Our oldest started a new job today so we were moving him to Houston. Thought we were through with the moving bit in 2009! He moved out of a second story apartment and into a third story one. That's a lot of steps! Thankfully my dad helped get him loaded in Tyler and Timothy came to help unload. Never could have done it without them!

Well, I've got lots of catching up to do around here. Catch up with you again in a few days!
Posted by TinaTx at 1:53 PM 1 comment:

I know, I'm a few days late but better late than never. 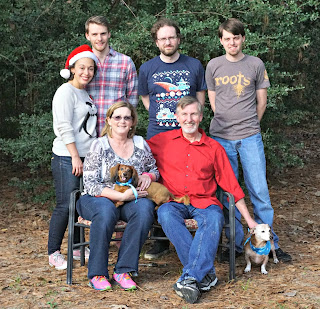 I hope everyone had a wonderful Christmas. We had a great week. Hubby took the week off work (actually he took two!). I was sidelined by a migraine the first day baby boy and his bride were here and barely got to say hello to them, but I enjoyed the rest of the week (as much as one can with a migraine hangover). We made a day trip to Jacksonville to see family there, then we spent the rest of the week just hanging out around here and enjoying visiting. It was nice to have a full house. There was lots of noise and clutter but I loved every minute of it!  It is pretty quiet here today (hubby's first day back at work) but it is going to be a busy week - more on that later.

I had someone who was going to come take some family pics but she had a family emergency and ended up being out of town while the kids were all here so when we were heading out for a walk Christmas day we caught a neighbor outside and had him snap a few for us. This was the best one - I know not why we tried to wrangle the dogs in the pic. We did take some more with ye old selfie stick - maybe I'll show a few of those later. :)

I didn't get a lot of any kind of crafty stuff done while the house was full, but hopefully I can get back to that next week.

Got all my Christmas fluff put away, now I just need to do some heavy duty dusting and get the regular fluff back in place. (after I find it - I tend to forget what went where and where I stashed it! am I the only one who does that?)

Have a great week!