So, where have I been this week? I've been held hostage - er, I mean on jury duty. There was hostage - er, jury selection on Monday. We were told to plan on Thursday and Friday so I spent Tuesday and Wednesday trying to get caught up on laundry, pay bills, change appointments, etc. The only good things I can say are that it is over, it only took one day and because I was selected this time, I don't have to go back week after next. (I got two summons in the same week - I was NOT happy) And, thankfully, the major migraine didn't hit until after I got home. It was the closest I have been to giving in to that nasty nose spray (YUCK)in a long time but I made it w/o having to use it. Whew

Now that we are done with that nasty business - here is what I did in the evenings while I was watching people make fools of themselves - otherwise known as American Idol tryouts. Yes, I am addicted. I just can't help myself. The lengths to which some people will go just to get themselves on television! (and here I have been known to take the long way around when I come upon a tv camera in public for whatever reason!) Whatever floats your boat. 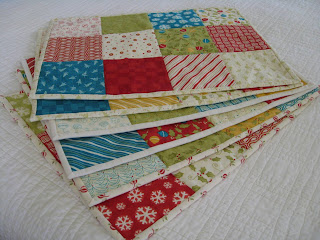 Anyway, I put the bindings on these place mats. I didn't have enough of any one fabric for the bindings, so I did two each of three different fabrics. Yes, they are Christmas but I didn't finish them for Christmas - actually, I didn't start them until after Christmas but now they are ready to wash and use so I will just consider myself really early instead of slightly late.
Off to finish playing catch up.
Hope you have a great weekend.
Posted by TinaTx at 3:17 PM

I love your place mats. I don't see why they couldn't be "winter place mats." You know, I've only been called up for jury duty twice in my nearly 52 years. What kind of magic luck is that! I get migraines occasionally, but usually after a lot of stress or exposure to a lot of dust! Say, cleaning a ceiling fan. Since I started taking bet-blockers for BP, I don't get them as much. My husband watches AI. I use to, but grew bored for some reason.
Brenda

Oooh, how beautiful!! I would use them all year round, they're just too pretty to put away...!

Great job on those tiny bindings! I always kind of dread doing quilt bindings(the corners). Fun to have new mats waiting for next year! :) Terry in Arlington

I love the place mats and all those wonderful prints! Nice job!!

I had jury duty on Jan. 9. I was selected, it was a civil case and we came to a verdict by the end of the day. Jury duty here lasts for two months. There is another case coming up next month, I will probably get the summons by mid Feb. It was an interesting experience to say the least!

I love your placemats. Your work looks gorgeous.

I love the placemats and they got me to thinking how fun it would be to have some in different color themes for different seasons. Thank you for sharing!