Have you ever signed up for a mystery project? I couldn't resist the new Mystery Block of the Month at Shabby Fabrics.

The patterns are free downloads on their site, but they have a block of the month program if you want to use the same fabrics and embellishments they are using.

This is my first real attempt at applique (I've done a little on the machine, but this hand applique is new to me) so I decided I needed some practice before I start cutting into the 'real' fabrics. I picked some stuff from my stash and used the needle-turn method for the first (January) block. 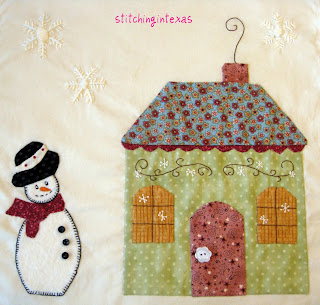 (it hasn't been pressed so don't judge to harshly) I rather enjoyed most of it. The small curves are a little tricky but I managed to get them done. I think I want to try the Shabby Fabrics method (spray starch) for the February block but I haven't had time to do it yet. They have great (applique) tutorials on You Tube. I've watched them several times and I'm sure I'll watch again before I try the February block. 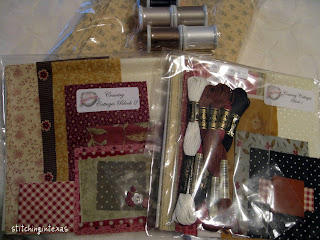 The first shipment included the fabrics for January and February. I also ordered the backing fabric and silk thread kit and those came with the first shipment. I love the fabrics and can't wait until I have enough self-confidence to start on the 'real' blocks!

I've ordered from Shabby Fabrics before and their service is great. I also met the owners in their booth at the Houston Quilt Festival. Super nice people. They don't know me from Adam and this is just my opinion, but I wouldn't hesitate to order anything from them or recommend them to anyone.
Posted by TinaTx at 10:20 AM

I love BOM programs and try to always have one going.

If this is your first attempt at applique - you could have fooled me. Your block looks fantastic.

Great job - this is something I have always wanted to try!

How fun! They definitely carry the most adorable fabrics. I've loved every thing that I have purchased from them.