I know - long time no post. More about that in a minute.
When I was putting the stuff back on top of my kitchen cabinets I decided not to put my two stained glass window pieces back up there. I had kinda just stuck them there for lack of knowing where else to put them but you really couldn't see them there. I finally decided to hang them going up the stairs. 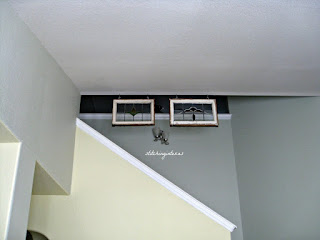 It's really hard to get a good picture of them. I'm standing in the breakfast room - kitchen to left, living room to right. I tried turning the light on the stairs on and the light in the game room on but both made too much of a glare so this was the best I could do. :( Looks better in person. 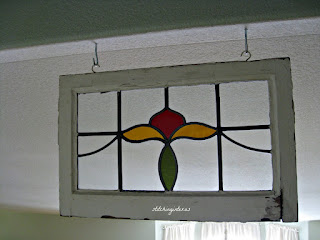 I love these pieces and I've always loved the shabby-ness of them. This one is in pretty good shape. 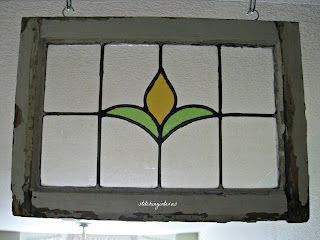 This one is a little worse-for-the-wear. I'm wondering if I need to spruce them up a bit since you get so up close and personal to them when walking up the stairs? (I took the close-ups standing on the stairs)
Where I had them before (on top of the cabinets) you couldn't really see the edges much so it wasn't an issue, same for where I had them at the old house. 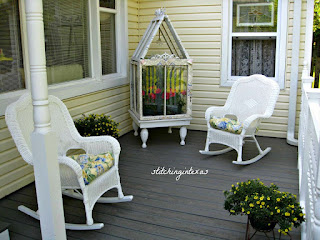 Best pic I could find without spending a whole lot of time on it. That was our bedroom window and the stained glass piece was between the mini-blind and the window. Not an option here because of the faux-wood blinds that take up the whole window. (still miss that porch) 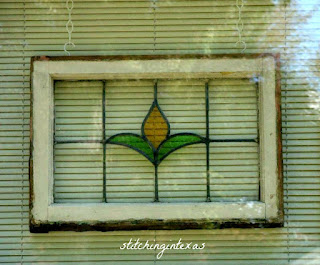 This one was in a window on the other side of the same bedroom. 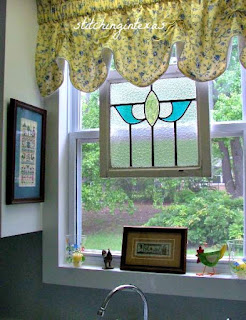 And just for kicks, I thought I would throw in the one I had in my kitchen window before. It is now hanging in front of the breakfast room window (which was right behind me when I was taking that first picture)
Okay - I haven't posted much lately. Seems I just have a lot of stuff going on (in my head) and I can't seem to get in the groove to post. I've done a bit of sewing but they are gifts so I can't post those. I haven't taken pictures of the piece from the applique class I took last month. I'm still working on the last block, but I could at least take an in-progress picture. I started a small (old!) cross stitch project but haven't taken any pictures of that either. :( Not a very good blogger am I?
All that said - if you have made it to the end of this long, boring post - I'm going to have a small give-away. And when I say small, I mean small so don't go getting too excited. Just a few little things I picked up in anticipation of my 5 yr blogging anniversary on the 15th of this month. I thought I would have some small handmade something and would put this stuff with it but the small handmade something hasn't happened and time is running short so it likely isn't going to happen. I had originally thought I would publish my first post on my birthday (July 20) way back when but I got so excited I went and published it on July 15. Since my posts seem to be so few and far between these days, I'll count any comments that happen between now and the 20th, whether on this post or any I might make between now and then. I appreciate all comments and try to respond if I have a way to reach you but some of you don't leave any way for me to reach you. For the drawing,if you are a no-reply commenter and I don't have your email address, please leave an email address so I can contact you. Thanks!
Posted by TinaTx at 11:12 AM

Hi Tina,
I am in the car onwayhomefrom nm. I love the stained glass in the new spot! maybe live with them a bit and decide about the shabby? Would you add paint if you changed them? Looks cute! Not a good car types!

Your windows are very pretty.

I am not the best blogger at posting frequently either.

Congrats on your milestone.

Love the stained glass - so pretty. Hope you enjoyed all the rain today - actually we had some pretty heavy downpours!

I love stained glass. Glad you put them where you will enjoy seeing them.

Hey there Tina! I love what you've done with your stained glass windows...gorgeous pieces. My sister does beautiful work with stained glass...I never tire of it!
Congrats on your upcoming blogiversary!
Maureen
mgw070(at)shaw(dot)ca

Hi Tina! Your stained glass is so pretty and looks wonderful hanging these. I love your sweet porch too! Thank you so much for popping in to see me and your sweet comments on my backyard!
Be a sweetie,
Shelia :)

I love old stained glass windows. Yes, it is hard to know where to put them. I like the one hanging in the window though :)
Five years?!?!?! Wow, that is worth celebrating. I haven't been posting much lately myself. Lots of thoughts but getting those thoughts with pictures and/or projects just doesn't seem to be happening...yet.
Congratulations on your blogiversary!!