Someone decorated our yard the other day! 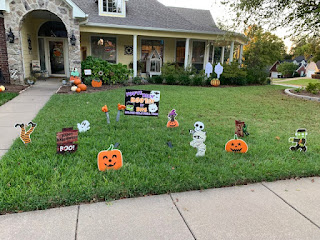 It's a fund raiser for one of the schools (drill team)
I wanted to keep it but hubby paid them to move it to someone else's yard, so it should be moved today or tomorrow. 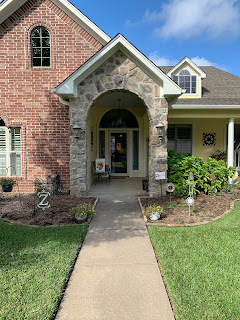 This is a before picture of the outside lighting on the front of the house.
The fixtures were quite faded and just blended into the rock. The one on the left was broken after whacking both hubby and I in the head one too many times. (squeezing between the house and the bushes that there before the freeze in February - weeding, mulching, whatever) 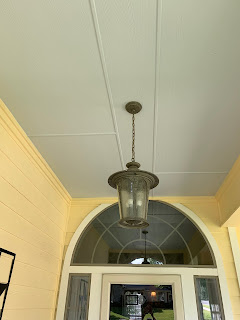 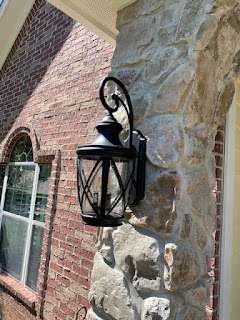 The backplate on the new sconces was one inch shorter and 1/4 inch wider than the old ones, should be easy enough, right? Should fit right into the space that had been chipped out for the previous ones. Wrong. Hubby had to chip out both sides. What should have been a morning project ended up taking all day! (can you ever do a project without having to make at least one trip back to the hardware store? Nope. One of the lights was broken. Thankfully they had one to exchange it for!) 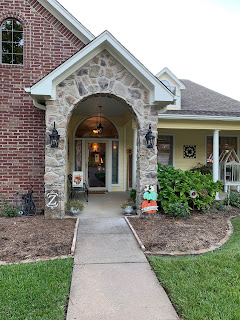 Anywho - I think they look much better. Now to figure out what to do in that flowerbed.
Anyone have any suggestions for keeping the squirrels out? Dang things bring pecans from across the street and bury them, then make huge holes when they come back for them.
Have you decorated for fall yet?
I should have some stitching to show next time!

I love the new lights! Yes, it seems every project has multiple trips to the store!

What a cool fundraising idea! I love the look of your new lights. My fall garden flag is out. Does that count?