to keep the economy afloat. Doesn't really look like all that much all spread out on the bed like that, but it sure felt like a lot when I was toting it around the convention center! 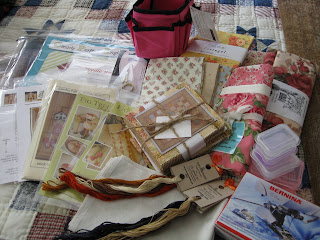 The girlfriends and I had a great time at the quilt festival. After getting off to a bit of a late start on Thursday, the rest of the weekend went great. We stopped at 3 Stitches (in Spring) on the way into Houston and shopped a bit. I picked up a couple of charts, some fabric and some new Sampler Threads. Since we had started a bit late, we were heading to downtown Houston in late afternoon traffic, but we made it fine. Got checked in and didn't move the car again until time to leave on Saturday. We were up and at 'em early Friday morning. We walked from the hotel to the show and were waiting in line for the doors to open at 10:00. We shopped 'till we dropped' and left around 6:00 - we took the shuttle bus back to the hotel! I picked up a couple of xs charts at The Silver Needle booth, a mini version of my little pink bucket that sits by my stitching chair (it is always too full to take with me anywhere, so this should make a great travel bucket!), a walking foot for Big Bertha, some misc. fabrics (just because I thought they were pretty), some fabrics for a couple of quilt tops and a few other misc. things.
I'm not sure how attendance was, but it felt like there were more people this year than last. That could be either because it was so freaking hot in there or just that my claustrophobia is getting worse. Several times I had to fight my way to the end of an isle just so I could breathe.
Our pink t-shirts (pic in last post) were a hit! We had a lot of people stop us and ask where we got them. It sure did make it easy to find each other when we got separated.
I've been trying to catch up on blog reading but you are posting faster than I can read! I had 350 feeds when I got home Saturday night (along with 95 emails) and every time I read a few, more show up! I still have over 300 (I'm not complaining - I love reading them, it just doesn't give me a lot of time to comment!) I'll probably be even farther behind by this time next week as we are planning to have a garage sale this weekend (to get rid of some of that stuff we cleaned out of the attic and hopefully make enough to cover what I spent last weekend!) and I haven't even started pricing stuff yet. I'll post as I can. Hopefully by next week I can get back on track.
Have a great week!
Posted by TinaTx at 6:37 AM

Don't worry about commenting on everything; we know you have been busy! You did good, looks like lots of fun and useful things!

It's bad enough here in Tyler. Houston must be hell in humidity. I haven't been there in many years. Looks like you got some good stuff and had a time of it. Girl time is always good for the soul.
Brenda

Sounds like you had a great time. Lots of great stash!

I sure can identify with you and the crowds and hot. I am just like you. Have always wanted to go to the Quilt Show in Houston. Looks like lots of fun. I am living it through you.

Don't worry about being behind. Seems about the time I get almost caught up and then I get way behind again. The week of Thanksgiving I will be away from computer. Don't even want to think about how far I will be behind after that.

Love reading when I get around to it.

Your trip sounds great! Love your stash and the pink Girlfriends T-shirt from your last post...hugs, Linda