Mushrooms and plates in the garden

Several years ago I bought a couple of ceramic mushrooms for the flower bed. When I went back to get another one, they were gone - and the place where I bought them no longer carries them. I've been looking for another one ever since.

Fast forward a couple of years and I go to the hardware store to mail a package to baby boy (yes, the post office is in the hardware store, now doesn't that sound like I like in Hooterville rather than just outside of Houston?) Anywho - I wandered around looking at the garden and giftie things they have in there (they have some cute stuff!) and I came across one lonely mushroom! I couldn't believe it! Only problem was that it was the same color as the smaller of the two I already had. I should have looked earlier - maybe they would have had other colors. I thought about it a bit and decided to get it anyway - who knows if I will ever find them anywhere else. I stuck it in the flower bed with the other mushrooms. (flower bed looks awful!) 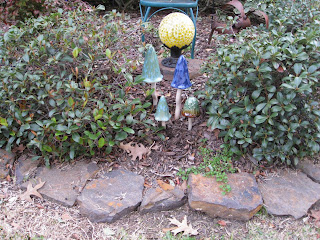 The smaller one on the front right is different from the other three - I found it at Home goods one day - the cap on it is attached. The other three are not attached, they just kinda sit there and will 'ring' if the wind catches them right. I thought they looked a little crowded there so I moved them. 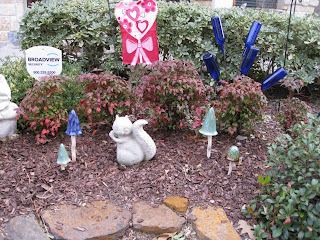 Not sure I like them here either. Once spring hits, I'll plant some more flowers out here but for now I'm just trying to fill in some blank spaces. 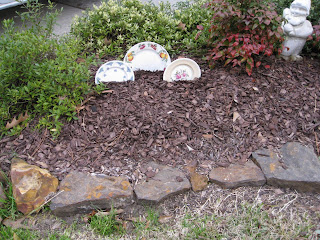 After I moved the mushrooms this corner seemed a little bare so I went digging in my box 'o plates and 'planted' a few. Trying to decide if I want to add a few more. I guess I should have stepped back and taken a pic of the whole bed. Maybe I'll get to that this weekend. I do have a project I'm working on - I'll show it when it is finished, but it is not a quickie so it will be awhile!

Have a wonderful weekend!
Posted by TinaTx at 2:27 PM

Hello there ... love the mushrooms ... you can get them at our garden centres here in the uk :) not that's any help really ..lol I bought one for my next door neighbour for her birthday last year :) love the plates there though :)
love mouse xxxxx
www.talesofastitchingmouse.blogspot.com

I can feel spring! Terry

The mushrooms are very cute, I will have to see if they have any here in KY. I had never thought of putting old plates in the garden, but I really like it. I may have to copy you on this. Well, you no that is the finest form of flattery - LOL!!

I have 2 left of the 3 that I ordered from a catalog some years back. Our Lowe's had metal ones last year.
Blessings,
Lorilee