We have neighbors that are expecting their first baby this month (a boy!) I wanted to do a little something for them so I made some burp cloths. 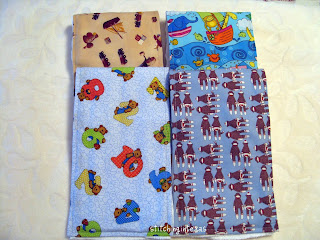 There are tutorials all over for making these - I read several then just kinda went with it. I used pieces of fabric I already had in my stash and the pre-folded diapers. (which there is apparently no quality control on - not one of them actually has a straight edge on the ends!) I even already had the diapers since I made some last month (but I forgot to take pictures before I delivered them) and they come ten to a pack. (remember when there used to be a dozen in a pack?)

Hopefully I will get some more sewing in today. Working on a quilt but I also want to do the February block of the month - the March block is already up and I haven't done February yet!
Posted by TinaTx at 12:33 PM

I like your burp cloths. I remember using plain old diapers for burp cloths but the printed ones are definitely much nicer!! Until they get burped on :/