Wow - last week really got away from me! I don't even know what happened to Wednesday. Thursday I was out all day with appointments then Friday the hubby took the day off so I never got around to posting.

Hubby had an errand he needed to run in Houston - he only goes into Houston occasionally on business, I rarely go and you will never catch me attempting to drive there. It is crazy and I'm lucky to not have a panic attack just sitting in the passenger seat. I can manage the two/four lane, 50 mph traffic around where we live, but that six-lane going 70+ mph, change lanes, exit, merge, exit again stuff is just more than I can deal with. If that wasn't enough we had to park in a parking garage to take care of his errand. I hate parking garages and this one had an extra low ceiling which makes it worse. I was seriously wishing I had just stayed home! 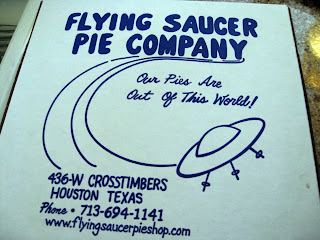 We have been hearing about this place ever since we moved here but like I said, we rarely go into 'Houston' so we hadn't searched it out yet. (they always show it on the news around Thanksgiving - lines out the door and around the block!) 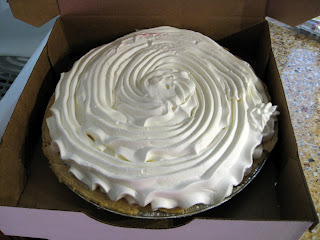 Anywho - hubby asked what was their best seller and the girl didn't hesitate to say 'strawberry' so that is what we got.

We ate the whole thing. Just the two of us. Not at one sitting, but over the course of the weekend we ate the whole thing! Hubby isn't really that much of a pie person but I will tell you he ate his share! (he prefers cake - me, I rarely meet a sweet I don't like)

Good thing it is gone and double good thing it is not on a regular route. I would be out in the garage digging out those 'too big' clothes I packed away last week!

How was your weekend? Did you have any pie?
Posted by TinaTx at 10:00 AM

Wished I'd had pie this weekend - strawberry is one of my favorites.

I have heard of this pie place but have never been there. I am a pie person - could not care less for cake. I actually love baking pies. We are twins when it comes to Houston freeways - I would have a heart attack if I had to drive on one. I take back roads and service roads if I have to go any farther than 5 miles from home---usually I con my husband into driving me! I grew up in small town Minnesota where we had two lanes and 5 cars on the road!!

I'm with you sister...on both counts!! We have big city traffic with 3 and four lanes, blah, blah, blah but we went through Dallas, at lunch hour no less, and I white-knuckled it the whole way!! Sheesh!
And sweets? Yeah, I'm not too terribly picky in that area, unfortunately. And I wouldn't have turned down that strawberry pie either ;)