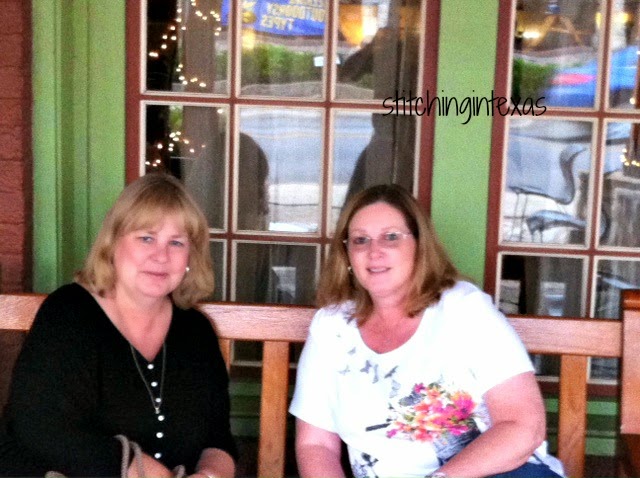 I'm trying to get caught up on posting some pictures but I just seem to keep getting farther behind! Last month hubby and I spent the weekend with Terry and her hubby at their beautiful lake house. They were very gracious hosts and we had an awesome time. Tried to take a picture of the two of them inside the restaurant but it came out too dark. Hubby snapped this one of me and Terry with my phone - not a great picture but it is all I have. I don't get a lot of hits, I'm not a 'mega blogger' (and don't want to be) this is just my little online diary but one of the best things to come from it is Terry. She left me my very first comment and we have been friends ever since. We took a 'ghost tour' Saturday night which was fun. Now hubby had a 'ghost radar' on his phone and is always looking for ghosts! It is a really cute little town and we did some shopping, I was good and only bought a glass flower, which I need to take a picture of it while it is still in the front flower bed. Who knows if the HOA will spot it or not but until they do, it stays! 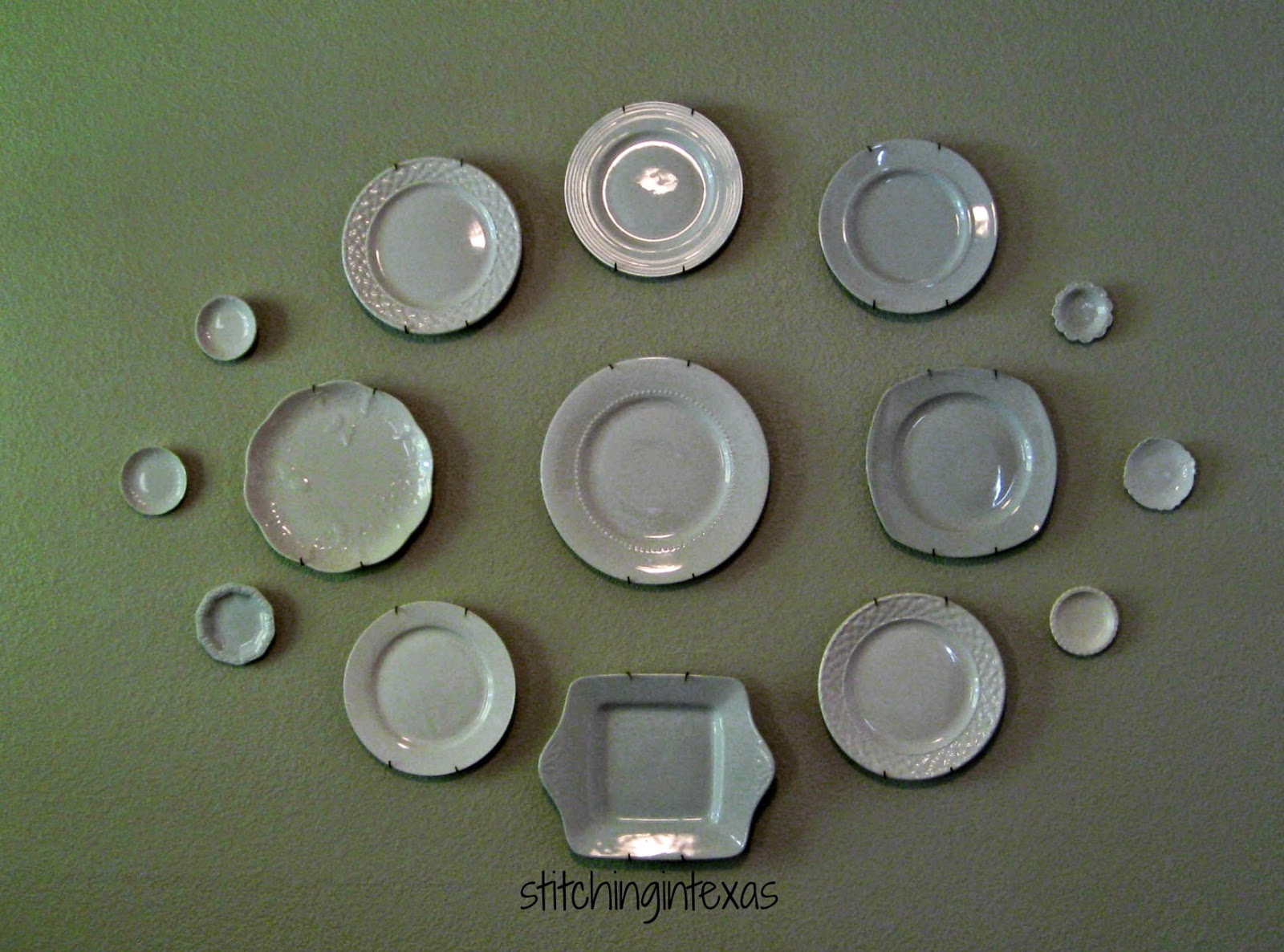 I've had the bigger plates hanging over my sofa for a while now and they just needed a little something extra but I never could figure out what. Terry had these extra white butter pats that she wasn't going to use and she gave them to me - I think it was just what was needed! (she has a really cute butter pat collection hanging in the room we slept in)
Thanks so much for the weekend Terry and Bob. We had a great time and hope you will come see us sometime soon. Not sure if we can be as good at hosting as you were - you rocked! 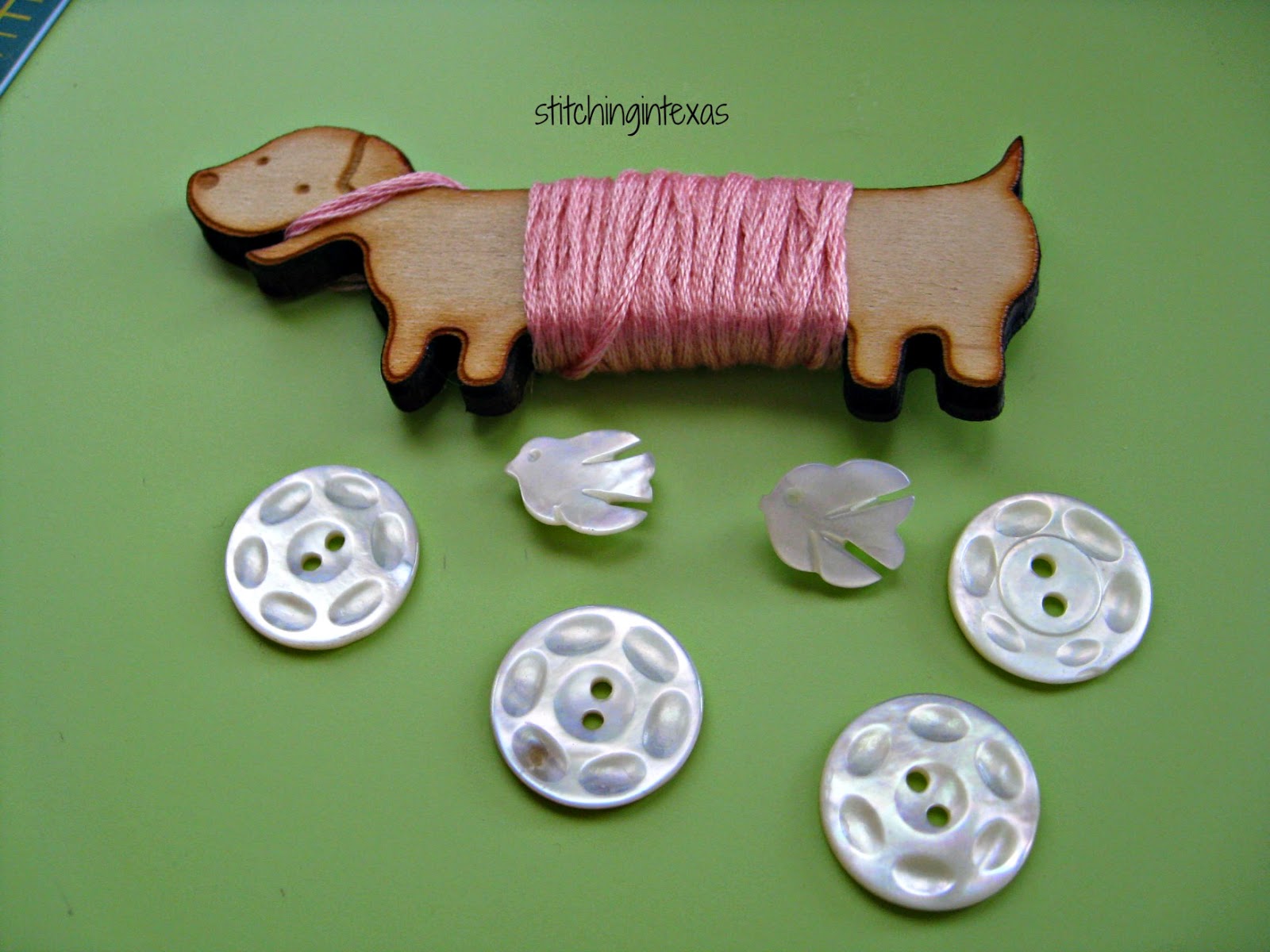 Then, as if the weekend of peace and quiet wasn't enough - she sent me these goodies for my birthday! I just love the little doxie thread winder. I have a collection of thread winders - most of them are Mother of Pearl but this one will still fit right in! And don't you just love the buttons? I'll have to find a special project to use them on so I can see them all the time instead of just putting them in the jar of buttons I have.

Still have more photos - and some I need to take so I'll be back. Not sure when (lots of stuff on the calendar the next couple of months) but I'm still shooting for at least once a week.

Glad you had a fabulous time! What a cute thread winder and fabulous mop buttons. Like your wall of plates. Enjoy your weekend, Tina!

glad you had a fabulous time and nice to see you both too ... love the plate collection and that wee winder is sooo cute :) love mouse xxxx