Looking out my back door 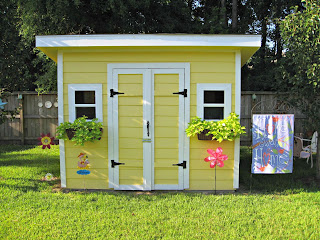 Back in the spring we had a storage shed built to house the lawn equipment and bicycles. It is not as close to the house as it looks - I actually took the picture from the edge of the patio since the patio is a mess and I didn't want to show it! Hubby is trying to make room in the garage for a juke box. At one time it was in the grocery store his parents owned then it was moved to their house. It has been in storage since his mother moved in with his sister but now it is time to move it here. It currently does not work but we are going to see about getting it fixed. Anyway, now instead of seeing an empty yard, we now have this cutie to see when we look outside. I still have to hang a few things on the front - I have the house numbers from our last house (we removed them and put up a plaque - have no idea why we saved the numbers but found them in a box) I'm going to paint them black and put them over the doors and I want to get some barn quilts to hang over each window. I will be waiting to get those at the International Quilt Festival in October so I won't have to pay shipping - just need to decide which ones I want.
This week is proving to be a busy one for me, hope you have a nice calm week ahead of you!

Tina, I really like the look of your shed. What a nice view to have out your back door.

That is very cute..I love the window boxes!

The storage shed is adorable! I pinned it :)

Last week was a doozy, but everything has settled down now. No more traveling for at least two weeks... yay!