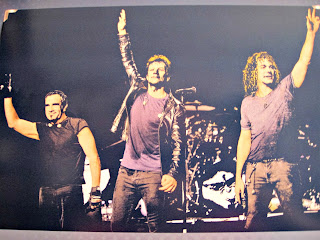 Time for a new view. 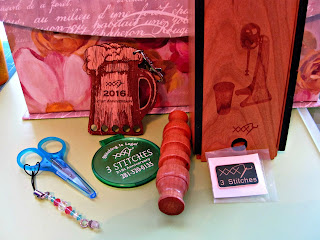 So, of course I had to check it out. Unfortunately I kinda split up what I came home with so this is only part of it. (do you like to look through your new stuffs before putting them away?) The box and thread winder I purchased - along with some charts and a couple of gifts (which I can't show) the other goodies are part of the 'thank-you' bag that Pam was giving away to celebrate the 21st anniversary of the shop. The scissors were in the gift bag and since I think all scissors should be dressed I came home and made a fob.  I bought the box to keep my scissors in at my stitching chair - I don't think I told you about my scissor sheath eating dog but she ate three of them in one week. Never bothered my stitching stuff before and only ate the leather sheaths. It's a wonder she didn't hurt herself since the sheaths actually had scissors - sharp scissors - in them when she stole them off my chair. Hopefully she won't eat the wooden box! (she has been known to chew on wood) 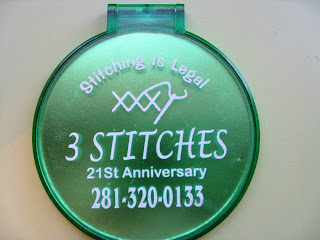 This is very thin mirror - perfect for a small purse.
Pam always has a 'theme' Can you see what the theme is?
Stitching is now legal. :) 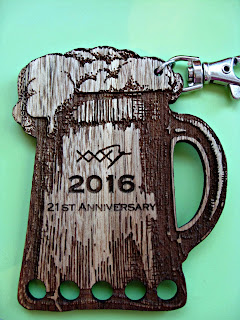 And who doesn't need a mug of beer to help keep floss in order?

I'm still stitching on my get-away pieces. I've finished the stitching part for three of the charts. Pics soon.

We finally got approval to paint the house so now to get on the painters list - hoping he can start soon!
Posted by TinaTx at 12:09 PM

Tina, what neat things you came home with. Your 'cotton candy' scissors (the blue ones in your goodie bag) are one of my all around favorites to use. Beware though, they are incredibly sharp. Hope the box helps to prevent any more sheath eating.

Cute goodies! I hope the box is Autumn proof!