Rockin' with the old folks

Whew - the last 4 days have been busy! This is probably going to get long - sorry!

Thursday we drove back to J'ville. We weren't 30 minutes away from here when the 'check engine' light came on. Great. Nothing we could do about it then so we just kept on truckin. Of course it was too late by the time we got in to call anyone about it then and hubby had an 8am meeting on Friday so it was going to be Friday afternoon at the earliest. So - I dropped him off and had 2 hours to kill before my haircut appt - I went shopping, naturally - what else would you do? There isn't much open that early in the morning so I ended up in Kohl's (got a gift) then wandered around Target (got things I didn't really need). After my haircut I noticed that the check engine light didn't come back on so I called dh (he was going to call the mechanic first break he had) he had already set up for us to drop the van off on the way out of town on Saturday. (we were bringing a U-Haul back anyway so we had wheels) I was meeting Sherry for lunch and as soon as I finished there I headed back over to pick up the dh so we could make it back in time to get the truck. (they aren't open on weekends and close at 5:00 on Fridays - small towns like roll up the sidewalks early!) Got the U-Haul, then went by the mechanic to see if we still needed to leave the van - they can't run the computer check unless the light is actually on so . . . it hasn't been back on and seems to be running ok. Who knows. So - back home to start loading the U-haul. They are coming to get the furniture from the apartment this Friday so if we didn't bring some things back we would be sleeping on the floor and eating with our fingers! We had already planned to be on the road fairly early on Saturday but an agent called and wanted to show the house on Saturday so we had to speed up the process!

After we were already in speed mode, we got a call from a friend (here is where the rockin' part comes in) who had tickets to see FLEETWOOD MAC on Saturday night and no one to go with him, did we want to go? Sure - but we have a 3 hour drive and a U-haul to unload so we had to up the speed mode to super-speed! We got everything unloaded and in the garage - but not upstairs - returned the U-haul, showered and were on time for the show. Now, I have no pictures of the concert. The 'rules' were no recording devices and I didn't try to smuggle my camera in - there is no way you can get a good picture from a small, point and shoot camera in that kind of arena anyway. (not that you would know it from all the flashes from cell phones taking pictures - which I'm sure didn't come out worth a nickle, but whatever) Anyway - the show was great. They rocked for a good 2 1/2 hours - and they are all considerably older than me! Tired me out just watching them. We had floor seats and nothing has changed since the last time I was at a concert with floor seats (25 years ago - my feet were much younger then) No one sits down! Since I am short and couldn't see the stage anyway about halfway through I decided me and my feet could see the screen just fine sitting down even if everyone around me was standing up. (and no, I was not even going to try standing in that chair!) 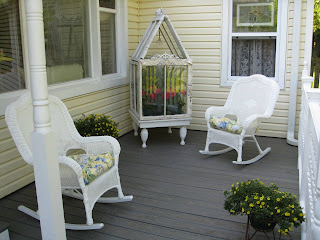 So, this is the only 'rockin' picture you get. The rockers on my front porch. :)
The crowd was as interesting as the show. Do you people-watch when you get in a crowd? The majority of the audience was older than me (and I am closer to 50 than 40) Some of them either never grew out of their twenties or just regressed because of the music and beer. The couple next to us needed to get a room for the first half of the show - I guess they 'got it out of their system' by the second half. One girl up in the stands needed a pole to go with the dance she was doing. Then, there was the younger (twenties) girl who had new boobs. They had to be new because she seemed to be afraid of loosing them and kept checking to make sure they were still there! It was an interesting evening.
So Saturday was a long day. Sunday, after we hauled up enough stuff that we could get one of the cars in the garage, we went looking at open houses around here (on the off chance that we ever sell ours and get to actually buy one) We looked at 9 houses. There was only one I would go back for a second look. The outside wasn't my style (as in brick - red brick, but most around here are brick at least on the front) but it had a great floor plan and could be workable. The rest were either too big, needed way too much work for the money, or just plain wrong. I've got the one on my list to watch and we will see what is open too look at this weekend.
So that's it. Today I've been trying to put things away so you can walk through here. I've got to get things separated too so when they come on Friday I don't have to hunt for the things they are going to pick up so there likely won't be any more post than what has become normal lately. (I also have 776 unread posts in my reader - I may never catch up!)
Until next time. :)
Posted by TinaTx at 2:32 PM

I've never seen Fleetwood Mac Live, but they are my favorite band. Lucky you. don't worry, the right house will come along.
Margo

How funny about the people at the concert! I haven't been to a concert in over 30 years!

I'm not much of a music girl but anyone can see you enjoyed yourself thoroughly at the concert :-)By the way, that's a real interesting cabinet you have on your front porch. What is it?

The 'cabinet' is a yard conservatory - or that is what Linda at Linda's Blue Gate calls them(if I had the link I would insert it here but if you search Linda's Blue gate she should come up) She makes them out of old windows and decorates them all up with broken china. Trash to treasure!
We usually call mine a 'porch house' since it sits on my front porch. I usually keep plants in it, but at the moment it has a garden statue.