I say that with a question mark because both the monitor and migraine are crap shoots.

To be fair, the migraine issue is always a crap shoot - sometimes daily, sometimes I get lucky for a few days. The daily ones are their own game - sometimes I can take a pill and keep on going, other days I just have to take a pill and a nap. I'm glad the hubby was home to greet trick-or-treaters since I really didn't feel up to it.

The monitor seems to come and go - I can auto-correct and sometimes might that helps, sometimes restarting helps. Have a message in to 'tech support' otherwise known as the middle kidlet so will see what he says. (right now some words look nice and crisp - others are fuzzy but the pictures seem fine) 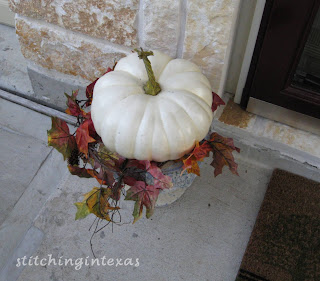 In the meantime, I thought I could show you pics of the pumpkins by the front door.
The urns came from my grandmother's house. It is kinda hard to keep anything living in them since they are so small and need water daily (which I'm not good about) so I keep non-living decor in (or on) them. 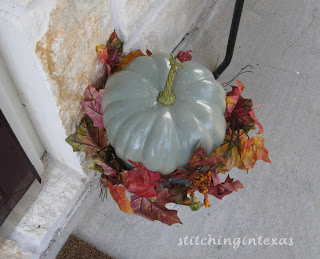 I wanted two white pumpkins but real ones were just to pricey for me (nearly 10 bucks each!) so I got some faux ones at Micheal's when they were on sale, and I can use them again next year. They didn't have two white ones that day so I got one white and one green.

Can't see them from the street but that is okay. I have my old shopping cart on the porch too (filled with more faux pumpkins) - I'll show a pic of that later.

Time for me to get back to getting ready for company - they come tomorrow!
Posted by TinaTx at 11:16 AM

ooo hope you get your comp fied soon and that your headaches disappear .. not good migraines are they ... cute pumpkin displays :) and guess what I've been doing ..... Painting !!!!!!