Yesterday we went to Nac to see baby boy in a play. For starters it was in the downstage theatre - which translates to a small, window-less, low ceiling room that is painted totally black. I'm not crazy about this room (aka - the dungeon). Anywho - the word that comes to mind about the play is - interesting. Hubby and I were both shaking our heads because we didn't understand a bit of it! We felt a little better when Jason said there wasn't anything to understand! That being said, here is a picture of baby boy and his bride after the show. He had another show last night so he had to keep the make-up on until then. We offered to take them out to eat, but he declined - can't imagine why! LOL) and Ashley was working on her next production and couldn't leave. (we did go pick up something to take back to them) 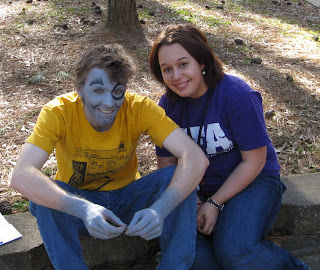 He starts rehearsals for the next play today. College theatre is sooo different from high school theatre - you just never know what to expect!
For some reason my spell check isn't working - I have tried to spell check the last couple of posts but it doesn't seem to work. Any ideas?
Oh - and Michelle asked about the cording on the stocking ornament. The bottom part is unraveled - I tied it in a knot so that it wouldn't go any further. You can use a bit of fray-check on the ends and that will sometimes help, or I have been known to take a matching thread and just sew around the end where I want it to stop (you have to pull it pretty tight for it to work).
Stitchy pic tomorrow!
Posted by TinaTx at 10:55 AM

Baby boy looks scarey. I'm sure he's a good lookin fella under all that makeup. I read what you said about the mud bog on vickie's blog. We have one of those just down the road from us. It baffles me too, I hate being dirty. I can't imagine traveling somewhere to get dirty, and then have to drive all the way home before I could clean up. Let's plan a trip to mineola soon. Maybe later this week?

What a great photo - your son looks pretty scary!

Thanks for the tips on the cording!

When I did my last post, a few days ago, the spell checker did not work. I thought that I was not doing something right, so I re-read everything and hoped it would be OK. Maybe the spellchecker would be up next time. If you hear anything, let me know.

When I did my last post, a few days ago, the spell checker did not work. I thought that I was not doing something right, so I re-read everything and hoped it would be OK. Maybe the spellchecker would be up next time. If you hear anything, let me know.