So, what has everyone been up to this weekend. I'm a little behind in my blog reading but I will catch up - eventually!
Yesterday the hubber and I took Jason to Dallas for auditions. He was going to be there for at least 4 hours so we took a ride across the metroplex and I spent some time (and money) in Aidaworks. I'll show that picture either later today or tomorrow. The picture for today is this set of shutters. 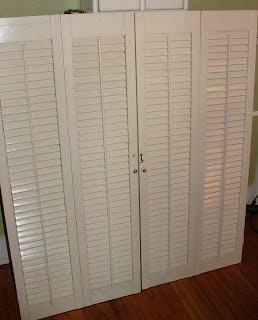 I've had these for awhile. They are salvaged from a house that burned several years ago (and it just happens to be that Mr. Wonderful worked that fire). Anyway, I bought them with a specific project in mind and that project is actually in progress, finally! Might be next weekend before it finished and I get more pictures.

Thanks for the comments on my Red Thread project. I'm having fun with it - we will see if I get bored before it gets finished!

Cathy - The design is from Bent Creek and is a series of 12 charts all connected with a 'red thread'. There is also a border which is free from most any LNS - if they have the monthly charts, they should also have the border. The border does have a embellishment pack that goes with it. (I think the emb. pack was around $11.00)

Okay - I'm off to clean up those shutters!
Posted by TinaTx at 1:31 PM

Can't wait to see what you do with those shutters.
Margo