Is now feathering his own nest.
When we sold the house the oldest moved into an apartment (he had already lived on his own before so we just had to get his stuff moved out of storage - we had already done the shopping thing with him when he moved to Illinois) Of course baby boy and his bride are in Minnesota (we won't talk about how many times they have moved - or when they will move again!) The middle child had never ventured out on his own. Nothing wrong with that, the right opportunity just hadn't come along yet. When we moved out of the house at the end of August he put his stuff in storage and moved in with friends until he knew exactly what he wanted to do. (I think he aleady had an idea, he just wasn't ready to share yet) We spent last week moving him to the Dallas area. He accepted a job at a church there doing basically the same thing he has been doing at our church for the last ... ?... years. (he has been doing it so long, first as a volunteer, then as a part time job and full time for the past couple of years so I really don't know when it became an 'official' job) Anyway - his 'title' is Director of Technology, but I imagine it will be pretty much like the old job (and living at home with us) -and he will answer to 'Timothy, fix it'.

It was a long few days and I didn't get a lot of pictures. Either I was moving something, cleaning something or just too tired and the camera didn't come out much but here is what I have of his new 'nest'. He is maybe a half mile from his new job. 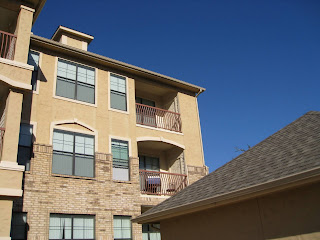 See that balcony way up there on the right - that's the one, on the THIRD floor - and it is a walk up! Whew. 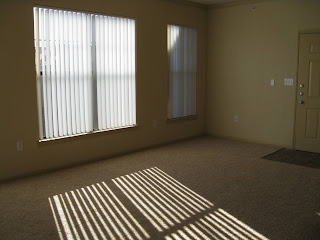 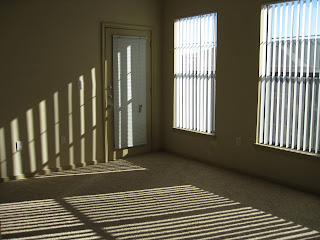 that door goes out to his balcony 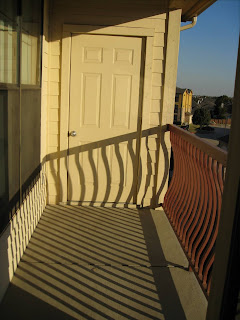 he also has a little storage room on the balcony 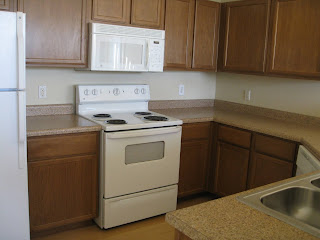 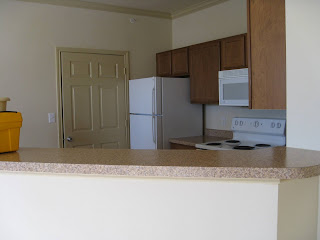 that door over by the fridge is to his utility room. He has hookups for a washer/dryer but they don't come with the apartment so he bought himself a set. (and had them delivered!) He shopped around and got a pretty good deal on a good set that should last him a long time. 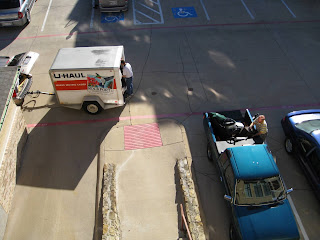 See - it's a long way down - or up depending on which end you are on at the time. That's hubby at the back of the U-haul - Timothy is probably inside in charge of what comes out next. That's my dad getting stuff out of Timothy's truck. Daddy and Brian went with us on Monday but just for the day - hubby and I stayed until Wednesday night. They were a lot of help though and we managed to get the trailer unloaded and returned on Monday. 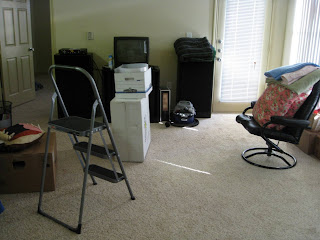 See that one chair - that's pretty much it for the living room! (the pink pillows are mine, not his) He thought he should buy the washer/dryer before he went looking for a sofa. He had a chair to sit in and if he waited on the w/d he would have to go find the laundry room on the property. He could never sit still long enough to do laundry and just wait for it. 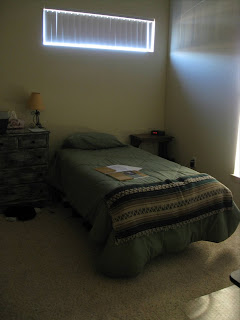 His bedroom is a nice size. You can kind of see the corner of the table he has in there with his computers. If you remember pictures from his bedroom at home, he had two six foot tables in his room but he only has one set up in here. He always has several computers he is using for spare parts! He also has a nice size walk in closet. 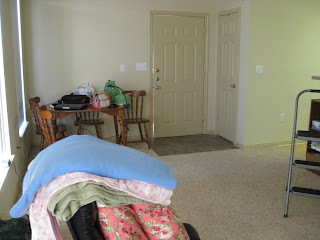 We gave him the table and chairs from our kitchen so he has a place to eat, in addition to the one chair he brought from his old room. He also bought himself a desk chair - mean old mom wouldn't let him keep hers. :)
Anyway - that's all the pics I have. You notice the kidlet isn't in any of those pictures - that is because he doesn't slow down long enough to let you take one! (also he hates having his picture taken - takes after his mom) They did have him come down to the front of the church at the end of his last service. He is a 'behind the scenes' kind of guy and was perfectly happy doing his job out of the eyes of the public. I haven't had a chance to ask him if they introduced him at the new church yesterday. Hubby and I couldn't stay that long but we did get a tour of the church and meet a lot of the staff before we left.
Well - that is about it for now. If I could find the other baggie with my picture hangers in it, I could hang some more stuff on the walls. I refuse to go buy any because I know I kept all of them when I was taking pictures down to pack. I found a bunch of small ones but I need a couple of big ones to hang a heavy mirror. Argh. Don't you just hate it when you KNOW you have something but can't find it?
Hope you all have a great week!

Wow, I bet you are tired. The apartment is nice! Hey big pillows are fine for watching TV! Who needs a sofa. At least that is the case while young. When older, it is hard to get up off the floor!
Blessings,
Lorilee

I love your balcony. There will be lots of great stitching days out there.

Your new place looks great, even if it seems to take forever to get settled. Stop looking for the picture hangers and they'll turn up. LOL ;-)

Congratulations to Timothy on his new job.