Out with the old, in with the new

For someone who was going to try to be better at blogging in 2010, I'm not off to a very good start, am I? Here we are 5 days in and I'm just making my first post!
I hope everyone had a happy and safe New Years! We did a little shopping at the hardware store then stayed in for the evening. It pretty much sounded like a war zone around here. Hubby went outside and watched - I stayed inside wrapped up in a blanket on the couch. I swear sometimes it sounded like they were going off in our backyard! I think they finally finished on about the 3rd or so.

So, on New Year's Day the plan was to replace this. So much for best laid plans and all. 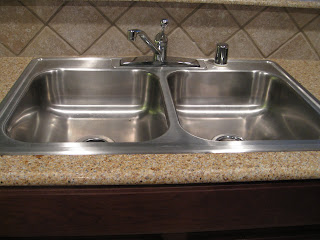 When we went to bed New Year's night, we had this. 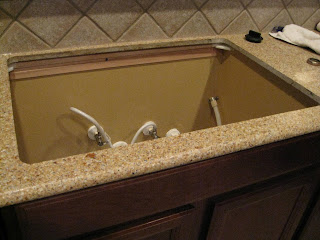 How many trips to the hardware store should it take to replace one sink and faucet? I lost count but it was either eight or nine. One of which was to return the first sink because we found a chip when we took it out of the box. It was getting pretty late in the day so before we loaded it up in the car (can you say heavy?) and drove back over (the closest one to us did not have one in stock) we called to make sure they were open. No answer. Not really willing to drive that far only to find them already closed so we boxed it back up and went back on Saturday.

After a few more trips for things like hoses that weren't long enough to reuse we finally have this. 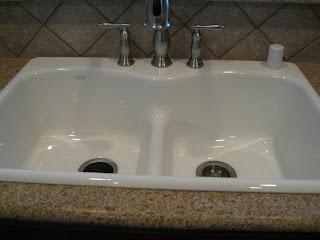 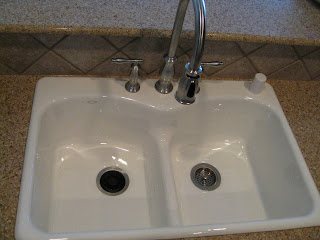 Nice and deep. So much better.
On to the next project!
Posted by TinaTx at 1:12 PM

Well, we are both 1 for 5, aren't we? I made a resolution to blog more, too, but so far only once. In my defense, though, I am READING blogs more faithfully, so that should count for something.
Love the sink; IF I ever get a new one, it, too will be deep! I could just cry when my remodels happen like that and I have to go to the hardware store more than once or twice; patience is NOT one of my virtues.

Beautiful. I understand the frustation with all the unexpected! We always have to make numerous trips for each project too! The good thing for us is that we live about 5 minutes from Lowe's!
Blessings,
Lorilee

We replaced our lake house kitchen faucet on New Year's Eve and made the many trips to the hardware store too! The first hoses leaked, then the next type were the wrong length..etc. Your new things look great! Terry in Arlington

It's a lovely sink. I do like ceramic sinks much better but I have a stainless steel sink right now.