It must be Monday

And it isn't a good thing. I am going to whine a bit so if you would rather not read about it, now would be a good time to hit the next blog.
I woke up to a headache (as in more than the normal everyday headache) also, there was no coffee this morning because the coffee maker we got this past fall decided to dump the water all over the counter instead of into the pot (twice!) Thought I would make some oatmeal - that ended up all over the microwave even though I didn't cook it nearly as long as it said to.
Wrote out a check to pay a bill that I needed to mail today. I put the payment coupon in the evelope and sealed it up - yep, without the check! Wouldn't you know it when you need to get back in an envelope it sticks like cement. (at least I noticed it before I mailed it)
Went to work with a diet dr. pepper hoping that would do the for caffine fix. It didn't.
I decided the first pill I took for the migraine wasn't doing the trick so I went to take another but I didn't have one with me. I finally came home at 1:30, took more meds and and a two hour nap. Still there - time to give in and do a nose squirt (I hate those) tried to go back to sleep but I couldn't so I thought I would check a few emails. My head still feels like it could implode at any moment, but at least my eyeballs don't feel like they are going to pop out so maybe it will get better.
Well, now that I have that out of my system - I need to say thanks to Jennifer at
Sweet Pea Stitches for the You Make My Day award. I'm supposed to pass it along to 10 more bloggers but as my brain isn't functioning at full capacity - okay, maybe it never does that but at least at it's normal capacity just know if you are reading this, you deserve an award!

Margo tagged me with the seven things about you tag. I really can't come up with seven more, I did this on September 28, 2007 and again - no brain power so I'll just have to use those again.

Since I'm brain deprived today I will just have to use a picture I already have on the computer so here are some Valentine towels I picked up a few weeks ago. 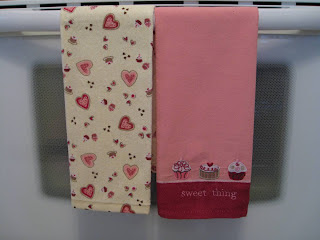 I'm through whining for today. I promise not to whine tomorrow - even if the head still wants to implode! If I can't post without whining, I just won't post!

Thanks for all the birthday wishes for Timothy, and for the nice comments on the cake. It really did look better in the picture than it did in person!

Spell check still isn't working here so, it is what it is.

You had good reason to whine. Some days are just like that.

Spell check didn't work for me last night either. Who do we whine to about that?

Hope tomorrow is a better day.

That sucks that you're not feeling well. Hope you're feeling better tomorrow!

Dearest Tina - I know how much you suffer from these headaches. I wish there was more one could do or say. Love, Esther

Tina - hope you're feeling better- the cake looks wonderful! If ya'll didn't eat it, send it to me! Vickie