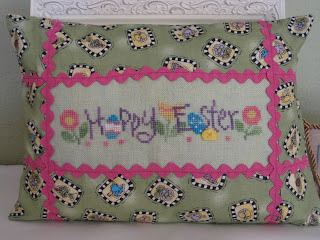 I stitched this cutie this week. It is a Lizzie Kate called Green Eggs but the eggs are blue. It just struck me as funny. A couple of years ago my stitching buddies and I went to Las Vegas for the CATS festival and I bought a little kit called Blue Egg (I don't remember the designer off hand and I'm too lazy to get up and look for it) anyway I started on this little kit while sitting in our room one night. When I got home I had to take it all out because I had started stitching the egg with green! Anyway - I made this little pillow yesterday. It is far from perfect (mr. machine and I had a difference of opinion more than once) but it doesn't look quite as crooked in person. If I had been doing it for anyone else I would have taken it apart and started over but it is just for me and will only be out a few weeks a year - I can live with it. 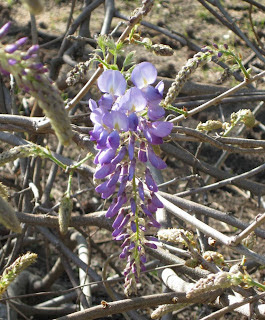 Our weather didn't get nearly as bad as they predicted on Tuesday. It kind of split and went north and south of us. My wisteria survived and has about 3 blooms on it today. I got really close to get the picture and it smells so good! I'm glad it doesn't have the same effect as lavender does for me. (migraine city - it ain't pretty) I'm thinking by this time next week it should be covered - I hope it makes it so I can get a picture before I leave for a stitch retreat on Friday. 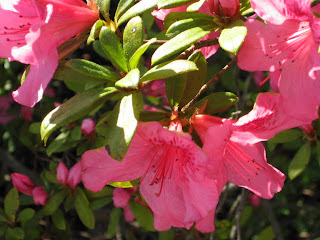 While I was outside I took a couple of shots of the azalea blooms. These poor plants have survived so much. At one time they were in the beds in front of the house but when we had to do some yard work they were jerked out of the ground and left for dead. (and I mean literally jerked - with a chain attached to a tractor). Anyway - they sat piled up in the corner of the yard for three or four days before we decided to plant them out back and just see what happened. Most of them are still living (although they aren't as full as I would like) I think it has been almost 10 years since we did that.
There won't be any pictures of the whole flower bed anytime soon. It needs a LOT of work!
Mr. Wonderful and I have an anniversary on Sunday - #29! Not sure what we will be doing this weekend since he has the weekend off. I may not get back to make a post before then so have a great weekend and Happy Easter!
Posted by TinaTx at 10:12 PM

Cute pillow, I think your finishing looks great. I love LK's patterns, such fun designs and colors. Have a wonderful Easter and Anniversary. I hope the weather stays nice for you, your flowers look beautiful.
Sue

Cute pillow. You are going to have to get Mr. Machine whipped into shape sooner or later. LOL!!

Lovely flowers. We are just beginning to see a few sprigs of green grass. No flowers yet. It is 34 as I write this.

I was thinking of your wisteria today as I was driving around town noticing them growing wild all over the place. They grow wild with no care at all, yet I can't get one to grow. go figure.
Margo