After the weekend we had, the weather was perfect yesterday and looks like the same for today. 50s in the mornings and 70s in the afternoons - my kind of weather. Not that I'm picky or anything.
Progress on things around here is going rather slowly so I thought I would introduce you to Big Bertha today. 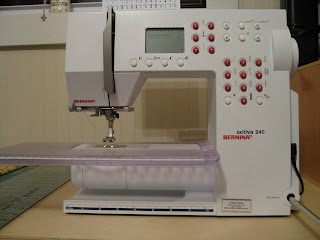 Big Bertha came to live with me about a month ago. So, either I have committed myself to learning to sew or I should just be committed. We are still getting to know each other. BB is the reason for the recent office re-do (this picture was before the table was finished) I'm still moving things around - trying to figure out what works best where - but I will show more pictures later.
I know I'm behind on some responses and I will get to them. I'm also way behind on reading blogs and while I will read all of them, my comments may be few!
Most of the clean up in our yard is done although none of the furniture and stuff has been put back where it goes. I will probably put the fall stuff out as we are putting that stuff back. We still don't have a house phone. In addition to the neighbors tree on the phone line, I saw another (larger!) one on the line on the other end of the street. They were working on that one yesterday but as of yet, they haven't done anything with the one next door. There are still a lot of places here in town - well, all over east Texas - with no power so no phone is not a problem. (and we do have working cell phones)
Hubby has been working long hours since the beginning of last week (because of Ike) and it will probably be that way (at least) the rest of this week so things around the house are moving slower than usual.
That is it for today. Just wanted to let you know if you left a comment, I really appreciate them and I'm working on getting back to you! (if you left a way for me to respond - I really like it when I have an email addy to respond to. (hint, hint.)
Posted by TinaTx at 8:00 AM

You and Bertha have fun getting acquainted. Don't bother to respond to me, just take that time to play and enjoy the weather. Here is Texas it's usually TOO hot, then TOO cold, or TOO wet, you can blog on those days. I'm spending today in the yard enjoying this little slice of fall, hope you can do the same!

I'm pleased to meet you, Bertha! Looks kind of formidable somehow... I need to get out some sewing and get to work. I always find some excuse, like going outside and taking photos!
Brenda

Hi Tina...Big bertha looks like a handful to someone like me who can hardly thread a needle and sometimes uses safety pins for missing buttons...No doubt in my mind you'll conquer her! ;-) Bo

HOLY MOLY is that a sewing machine...or a super computer that is controlling the planet???? I wouldn't even dare touch that thing. Looks like you'd need a PHD just to push the foot pedal...oh wait...does it even have a foot pedal? Anyway, I admire your ambition! Can't wait to see what that thing makes!!