Karen got a little ahead of herself yesterday - she was wrong, but still right. 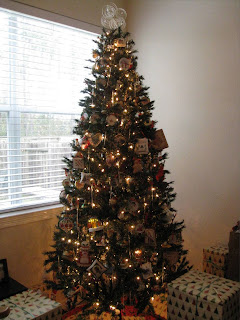 She guessed 5 but 'thought there might be more'. This is the big tree in the living room which brings the count to 6. Not the best picture but sun, we ain't got. Once we got the tree put together and straight and started plugging in the lights I remembered that there was a section that had gone out and we just kind of stuffed some in to make it do - I totally forgot that I had bought six boxes of lights to re-light the tree with. (I found them after about half the decorations were already on - wasn't about to start over!) so I'm marking in my 2010 calendar that sometime in November I need to set aside a couple of days to light the tree before we start decorating again. So if you think you see a few dark spots, just pretend they are twinkle lights and those are the sections that aren't twinkling at the moment - that is what I've been doing!
My tree topper showed up much better when it had a green wall as a backdrop. Hopefully by the time it goes up again next year there will be some color to show off the topper better.
I'm not going to even try to shove those big boxes under the tree - they will be delivered in the next few days so . . .
While this is the last of the trees, I do still have some decor shots I can show later in the week.
Now if we could only have some sunshine around here!
Posted by TinaTx at 2:22 PM

Well, I was close! The only reason I didn't guess more is that I didn't think you were THAT crazy! :) Tell Jimmy that the outside lights look good. (he posted pictures of facebook) I know he missed having Timothy's help this year.

All your trees and decorations looks so pretty!