While Brian was here this past weekend he wanted to go to Ikea. Well, it just so happened that while hubby was out mowing the yard, 3 Stitches called to let me know the new JXS ornie issue was in. So on the way to Ikea we took a detour through Spring so I could pick up my magazine. Now, I ask you (stitchers) how often do you walk in a stitching shop and only come out with a magazine? That's what I thought. 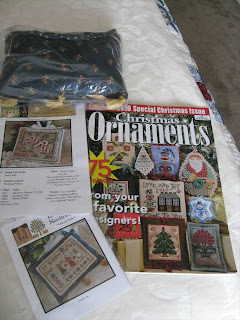 Actually, I did pretty good - I only picked up two extra charts and the hanging pillow to go with one of them. Both are Little House Needleworks charts 'Peppermint Twist' and ' Liberty Bells'. 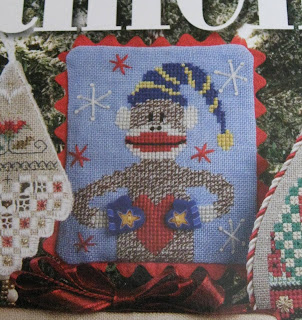 Don't you just love sock monkeys? I saw some fabric with sock monkeys on it awhile back so I'm going to be on the lookout for it again because I think it would make a good backing fabric for this.

I haven't touched the Silent Sampler in who-knows-how-long. (since the last time I posted an update - however long that has been) but I think I'm going to pack it up for a bit and see about working on a fall piece, then maybe a few ornaments. I think I could use some time on some smaller projects and I never get as many ornaments stitched as I want to.

Update on the printer wars. I beat it into submission - okay, I took the printhead out and cleaned it with alcohol. It worked long enough for me to get my copy of the insurance card then printed out a couple of freebie charts this morning. I tried to make a copy a little while ago and it is being ornery again. It scanned, then printed but it printed a blank page! Scanned again and printed - worked fine. Turned the paper over to get the other side, scanned and got another blank page before it finally scanned and printed. I'm keeping my big stick handy, just in case.

I really should go catch up on ironing, but I might just have to kit up an ornie or two first!
Posted by TinaTx at 1:36 PM

Tina, I'm so sorry your cake dome got broken..my heart sank for you! (I would have bawled too if it had been my grandma's!) I hope you find another one just like it to soothe your heart! :)
Love your stitching stuff...that's one thing I don't do is needlework, but I'm going to take knitting lessons starting in October! :) I'll probably make one scarf and be so frazzled I'll never make anything again~! lol I like to work with wood, not yarn...so say a prayer for me! :-D
Hugs
Missy

Go to a stash shop and only buy what you came for? Isn't that against the law or something? I wouldn't risk it!

NO! I hate sock monkeys! They give me the serious creeps! LOL When I was in Jr High I was into spooky stories and one about a sock monkey really scared me!

I love sock monkeys too. I have a tiny one with a Santa hat for my tree. Also, I have read some of the Sock Monkey story books to my class. :) Terry

Amazing thing about electronics - when they are working they are wonderful, but....
sorry your printer is at the but.

I have been eyeing Peppermint Twist for a while, just may have to break down and get it.

I am a sock monkey lover also - I seriously need to go to 3 Stitches and get a copy of this magazine. I have made so many sock monkeys but have yet to cross stitch one - sounds like fun. I remember seeing sock monkey fabric once - will keep my eye out for it and let you know!

I just got my magazine and found so many sweet stitches. I love the sock monkey too...it's on my to do list for sure....happy stitching..hugs, Linda

Haven't been doing much blog reading lately, but thought I'd stop by and say "hi". That sock monkey is absolutely adorable!