I really didn't mean to take such a long break - but honestly, I could take a longer one and still not be caught up on my 'to do' list. I think for everything I mark off, I add two. Some of the things on that list have been there for over a year - meaning since we moved into this house - okay, some even longer! (I was going to organize pictures when we were still living in the apartment - still hasn't been done. Shame on me.)

Anyway - while I haven't accomplished all the things I wanted to, I've missed all of you and thought I would try to get back to some kind of regular posting. I haven't been sitting idle for the past month. We have been working on the master bath - still a work in progress, but it is getting there. I've got most of the fall decor out. I bought a mum to put in the front flower bed - we will see how long it lives since I've never been good at mums. I have it just sitting on a chair over the hole where I dug up the dead azalea. I'm still debating if I want to try another one next year or just do something else there. (you can't see the hole unless you actually walk up to the flower bed and look!) I'll try to get a picture soon - while the mum is still alive!

I also took a 10 day road trip with the girlfriends. We drove to Pennsylvania. We had a great time - we stopped at quilt shops, flea markets and antique stores all along the way. I still haven't sorted pictures, but I'll get to that and show you some. (I took around 200 so I'm sure you don't want to see all of them!) Even with all the pics I took I failed to get one of the four of us together and I also didn't get one of Sue (no blog) who drove over to Hershey to meet me in person. I was really excited to meet her and I thought we would see each other again before she left to go back home but she had some things to take care of there in Hershey so we didn't get to meet up again. Sue and I 'met' on the cross stitch boards on AOL a long time ago and have been friends ever since. I hope I get the chance to meet up with her in person again!

Autumn has been a bit busy too. She is into chasing lizards and frogs lately. It doesn't really matter what gets in her way. 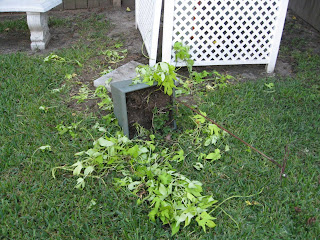 This used to be a potato vine. As you can see, she completely shredded it. I didn't even attempt to salvage it. 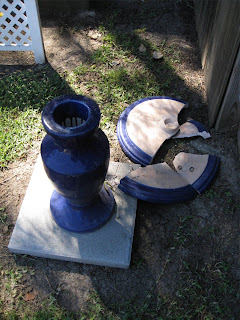 A few days later, there must have been a critter in or around the bird bath. She had been outside awhile and when I went to see what she was up to, this is what I found. I know the wind didn't blow it off - there is too much other stuff out there that would have been overturned had it just been wind. No - I'm pretty sure hurricane Autumn was the culprit.

Okay - as for the title of this post - dashboard says this is post # 500 - according to the archives on my blog page, it is # 495. Like I said I would back in the Sept 15 post, I took the comments that have posted since then and drew a name. Someone has a package coming there way soon. Since I have the address of the person I drew, I think I'll let it be a surprise! (it isn't much and the package wont be mailed until later in the week but it will get mailed!)

That's all for now. If you are still reading - thanks for hanging around!
Posted by TinaTx at 2:06 PM

Hi Tina - Glad to see you blogging again. But to tell the truth I probably wouldn't have even known because I haven't been posting or blogging much at all. Sometimes life just gets in the way doesn't it. Glad to see you back.

I've missed you! Glad you are back.

We all missed you - so glad you are back. Your trip must have been wonderful - I have always heard Pennsylvania is a great place to visit.

Thanks for the email. So nice to see you blogging again. Sounds like you had a great break, esp. the traveling part with the quilt shops, flea markets and antique stores. Now that's my kind of holiday :-)