Hope you all had a wonderful holiday weekend! Hubby took a couple of days off so he had a long weekend so he could spend some time with the boys while they were here and get some things done around the house - like getting the outside lights up! 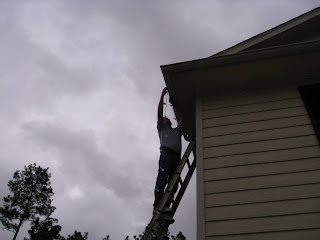 He started Wednesday afternoon - notice the cloudy sky. It might have looked cold, but trust me, it wasn't! I was out helping (put hooks on the lights - I'm not going up that ladder!) and I'm still scratching skeeter bites. Apparently the skeeters don't know it is November. 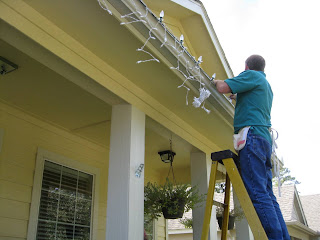 Thursday morning the 'menfolk' got outside to finish up the lights while I was in the kitchen cooking.

Last year we used the lights we had been using at the old house. We had been using them for quite a while and some of them were getting to the point they didn't work well so we decided that this year we would get all new lights and switch to LED - which is fine but since I'm an all white light kinda girl and I have learned from experience that the all white ones are the first to go, so when they first started putting out lights we went shopping (looked at my receipt - Oct. 9) We looked at several places hunting for the best price. 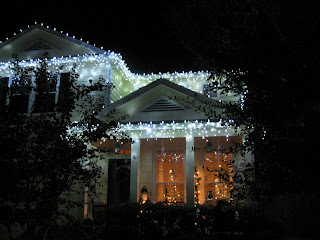 Some brands only had one 'white' while others had three. I really prefer the look of the warm white, but we ended up getting the cool white. I'm not totally happy with it, but they are up and we aren't changing them. You can see the difference between the ones on the house and the ones inside and on the porch. (the dining room light is not on - that is the glow from the two trees in front of the windows - at least you can't see that they aren't decorated or that the lights on the bottom half of the tree on the right aren't working). 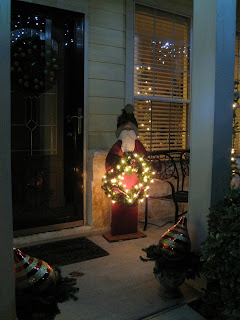 Maybe it is okay that the ones on the house are different - they do look more like 'ice' than the warm white ones do. 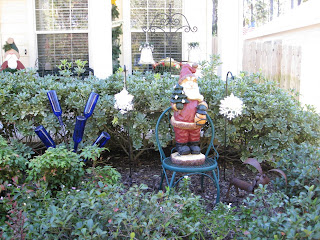 You can't see the Santa in the flowerbed at night - maybe he needs a spotlight?

I'm working on the inside this week- I think it is going to take awhile!
Posted by TinaTx at 1:26 PM

It looks beautiful. My tree is also up with lights, but no decorations yet. Windy and in the 40s here today! brr Terry

Thank you so much for sharing, your house looks beautiful. Good luck with the inside.

It looks wonderful! I jealous because I haven't even taken down my Fall decor yet. We went out-of-town to the Renfest on Saturday after Thanksgiving. I hope to get started on decorating this coming weekend!
Love your bottle tree too!
Blessings,
Lorilee

Here I am again. I forgot to add that I wish I could get some of my guys on the ladder. At least they hold it for ME!
Blessings,
Lorilee

WOW! Your house looks lovely. I sure wish I could borrow your men-power!