Let there be light!

So - I seriously think I need a time management lesson (or three!) I never seem to get through my daily to do list. For instance, I intended to write this post on Monday!

Anyway - on to the lighting. I think the builder looked for the cheapest lighting possible when building this house. We have been working on replacing most of it and we are almost there! (the previous owner didn't change anything - nada, didn't even so much as hang a curtain!) This house has an open floor plan so the kitchen looks into the breakfast area and then into the living room. The kitchen has 4 can lights (hate, hate can lights - still haven't quite figured out what to do about the ones in the kitchen yet) and the breakfast area had one dinky little can light - way on up there. (the kitchen/bay window ceiling is 9' and as you can see, this goes on up from there) 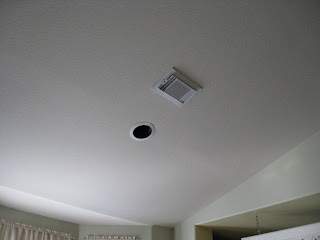 The hubby got a little ahead of me and had already taken the bulb out before I could get my 'before' picture so just imagine a bulb in that little black hole. 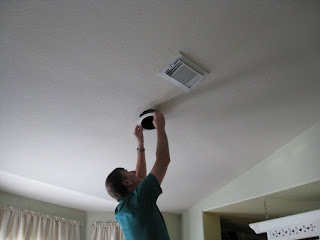 Out came the useless can light 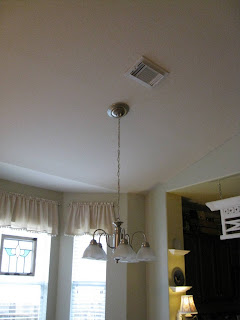 And in went a chandelier! 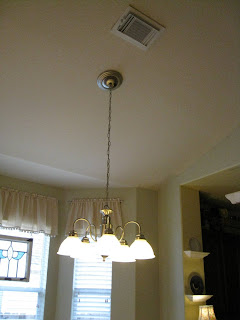 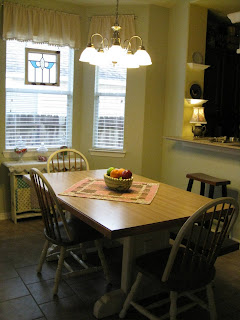 And look - it actually throws light on the table! I would have liked to had some cute (maybe even vintage) fixture here, but the whole reason for the replacement was the lack of light and some of those really cute/vintage fixtures are just that - cute. I tried to pick something with bulbs that were directed down for maximum light. (I took this picture on Monday when it was cloudy - sorry about the off color)

Now, how long do you think a project like this should take. Couple of hours maybe? Try more like seven! The converter kit for the can light said 'takes minutes, not hours'. Ha! They don't say how many minutes! LOL. Part of that time went to two trips for spray paint. The converter kit had an adapter plate in it to cover the hole but it was white. The ceiling is builder beige and the fixture is brushed nickel so that was going to stick out like a sore thumb. Off we went to Wal-mart (closest place) to get some spray paint (the closest thing I had in the garage was chrome) They had a satin nickel so we got that. Two coats (dries in 10 minutes!) later I brought it in only to find it was too 'gold'. Back out again, this time to Lowe's where we found brushed nickel - only the dry time is one hour! (we used that time to have a bowl of soup for dinner) Of course by then it was dark so we had to use the lights from the kitchen and living room along with my stitching lamp and a flashlight. At least it is done now!

We have sun today, but it is cold. (for Houston anyway!)

Hope you are having a productive week! :)
Posted by TinaTx at 10:23 AM

It looks so much better, Tina! I'm telling you...proper lighting can change the whole mood of a room. And its occupants! Nice job.

I was wondering what 'can lights' were, then i saw your photo, we call those recessed lights here in the UK, funny how we speak the same language but have so many different names for the same thing, don't you think?, lol

I think your chandelier looks so much better :-)

I also hate recessed (can) lights. They don't put out enough light to do anything with. Our new lake house has tons of them..I will have to see what else I can add. Ya'll have gotten so much done on your house. It is looking very good! Terry

Your project sounds alot like projects at our house! We had to replace our TV last weekend and we bought a simple media stand, said assembly would be 15 minutes! I looked at the clock when we started and ahem, 35 minutes later, we were done! Isn't that just the way it goes. You would laugh hysterically if I told you our 'replacing our powder room light fixture and towel bar story'.......let's just say, we aren't the handiest people around when it comes to home improvements!
I really enjoyed your story and the light looks great. We need a light in our sunroom, junction box is there, but no light. Also, we want to change our dining room fixture and the fixture in our two story foyer. Wish us luck on that!
Builders don't seem to put the best of lighting in, for sure. Ah, and do I dare tell you, our laundry room light fixture bit the dust before Thanksgiving and is still not fixed! Perhaps, you could lend us a hand, lol!

I had recessed lighting in BRC 1. I didnt like it that much either. Although it worked well where it was. But I think your new fixture looks so much nicer! It seems like bulders always use the cheapest lighting!! I have noticed that in so many newer homes. They must just expect the buyer to replace them, lol!
Your home is looking so cute :)
Hugs and stay warm!
Amy

I can't believe all they put in the breakfast nook was a can light! I have a bunch of can lights in the kitchen, and it took me quite awhile to get used to them :( I hate the way they look;ugly hole with a bulb in it. We've looked for covers, but to no avail... Love the new light, much better!
Donna in WV
catsandbeetles@hughes.net