That is pretty much all you can say about my weekend! I spent the majority of it in my stitching chair. I worked on Home of a Needleworker (getting pretty close!) 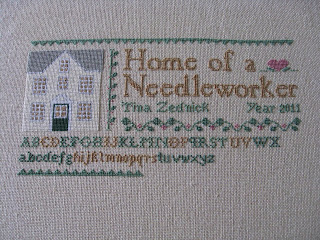 and I did a little on my quilt. I can't say that my quilting stitches are looking any better yet. I've finished 3 (out of 20) blocks so far. It was kinda nice to have it to work on this weekend since it was a bit cooler than it has been the last couple of weeks.

The hubby has been after me to watch 'The Godfather' for as long as I can remember. He put it in Saturday afternoon and since I was sitting in the chair anyway I kinda half watched it. Can't say as I see what all the fuss is about. I guess it is a guy thing. I really don't have an opinion one way or the other, but at least I can say I've seen it now.

Since we were gone several days the past week and I was such a slug over the weekend I seem to be pretty far behind on most stuff. (okay - some of it I would be behind on even w/o being out of town) One of those things is blog reading. I've tried to catch up a bit by reading and not commenting but I still have nearly 600 posts to get through.

Last thing before I get back to reality - my friend Carolyn is having a giveaway over on her blog - stop by and give leave her a comment! Just One More Stitch.
Posted by TinaTx at 1:36 PM

Your home of a Needleworker is looking great! :)

I love those lazy kinds of days. I actually had one today. The only productive thing that I can say that I did today was get up. LOL

Your stitching looks so neat and tiny! It is gorgeous! Terry

oooo this is tres cute :) you are doing it over one ??? I am doing the other version ...and mmmmm lazy days are good :) could do with more of them tbh ..lol love mouse xxxx

Your Home Of A Needleworker is awesome !!