So, I'm not sure exactly how long ago this first picture was taken, but things haven't changed too much there until this week. I'm sure there is a closer picture of the bakers rack somewhere but I didn't take one right before moving it out and lazy me doesn't really want to look too hard right now. Anyway - this is what the breakfast room (area? not really a room - anyway) looked like with the bakers rack. 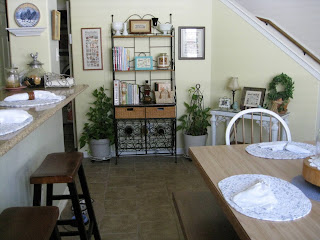 I had to move the two pictures hanging on that wall since the new cabinet is wider. The one on the left went to the kitchen (had to move something for that) and the one on the right went by the front door. 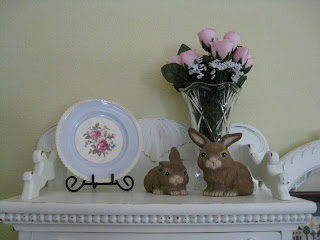 Not sure how things will turn out in the end, but I pulled a few things together to put in and on the 'new' cabinet. The plate is one that I picked up in PA back in September. It has been hanging out in a box until I decided what to do with it (and all the others I bought while there) The bunnies I made years ago and usually bring them out in the spring. I haven't put my Easter stuff out yet and these will likely move when that happens. (in fact, all this could move at that point) Hubby brought the vase for Valentines Day (along with real flowers) for now, I'm going with the faux. (since I already had them) 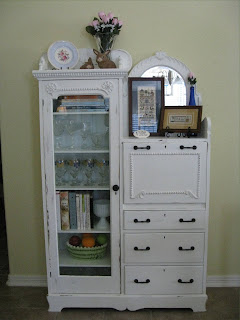 The taller pic in front of the mirror is the one I moved to hang the Country Kitchen Sampler in the kitchen. Haven't decided exactly where to hang it yet but it won't stay here. The Rise and Shine may stay, may not. 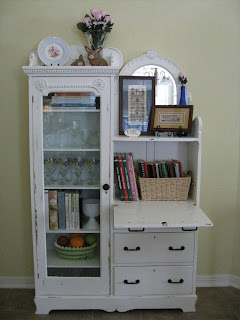 I put some cookbooks on the top shelf. Some stemware on the next two shelves and more cookbooks below that. The fruit bowl will eventually end up back on the breakfast table and on the bottom (that is partially covered by the bottom of the door) is more stemware. I decided not to put the divider back in behind the drop-down desk. I thought I would get more use out of the space if I used it for cookbooks. (I'm saving it though - might use it somewhere else eventually but I don't want to get rid of it in case I want to put it back in here at a later date) The basket holds all those 'church' and 'organization' type cookbooks that don't like to stand up straight. I have more in a kitchen cabinet - they are some I rarely use and are in a cabinet that I have to climb up on a ladder to get to so I'm leaving them there.

The white table is still to the right on the angled wall - I didn't step back and get a full shot today - creative cropping and such. :)

Well, sounds like doggie nap time is over - best go see what they are up to. Hope you are having a great week! Our weather has been wonderful the past few days!
Posted by TinaTx at 2:12 PM

I think that is the perfect piece for that spot. Enjoy it! Terry

Your project turned out great!!

It looks really great in that spot! I like the way you filled the shelves, with both light and heavy items! Great job.

Where in the world did you find this absolute darling of a cabinet?! I love it. You have a great eye for seeing the potential in old things and the creativity to give them beautiful new life. Great job, Tina.