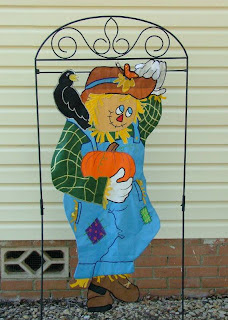 He was hiding in a box with Christmas decor! Of course it was a box that was on the bottom of a stack. I have no idea why he wasn't in the box with the rest of the flags but anyway. Now you are asking, why am I posting pictures of the silly scarecrow? That would be because I haven't done any stitching! (and I'm starting to get cranky) I haven't picked up a needle since the ride to Nac Friday afternoon (and those roads don't make for good stitching so not much progress)

Linda - yes Jason is an 'aspiring actor'. Though if you ask him, he will tell you (and I quote) " Acting is not something that I do, it is who I am". That is what he told us when he was in the 10th grade. We knew then he was serious about it. He is a theatre major (so is his wife, but she is studying stage management while he is studying performance). I have no choice but to assume he will make it - he has no back-up plan! I'm glad he is finally getting some time on the mainstage - I think he was starting to think he was wasting his time at college when he could be in LA or New York. I so want both of them to finish school and right now they seem to be pretty focused. They are halfway there!
Posted by TinaTx at 5:19 PM

Yippee! So glad you found Mr. Scarecrow! He is adorable.. I'm hoping to get my pumpkin flag up this weekend. This of course entails climbing on the roof of the house so I will leave it up to my darling husband. :)

P.S. I hope you can get some stitching done soon... somedays are just like that (it's been a couple of days for me too!)

Oh he is cute! I have never seen one like this guy before. Glad you found him! xo, Becky

PS: Pick up your needle, Tina!!

What a cute scarecrow!! I need to get my Halloween garden flag out soon.

Glad you found it - it's adorable!

Mr.Scarecrow is too cute! Thank goodness he wasn't with Easter things, he might have missed Halloween:).

Halfway there is great, you must be very proud of them.

What a cute scarecrow! I wish I knew how that Christmas stuff mixes with the Fall stuff. I just found one of my lost Christmas elf dolls in with my Halloween things ;)