Thought I would pop in and make a quick post while we still have power. The wind is picking up and it is starting to rain lightly.They tell us to expect the power to go out and stay out for several days. Oh how fun. This was supposed to be a girls crafting weekend but I had to cut it sort because of Ike. (I'm using great restraint by not typing a not nice word here - I'm thinking it though) I went to my friend Sherry's on Thursday and wasn't supposed to come home until late tonight but I had to come home late yesterday instead.
I thought I would show you the pink pig (from the Red Thread piece)I stitched on the other night. 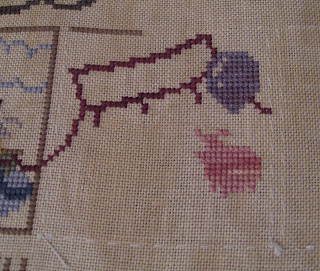 If it isn't too hot after the power goes out, I will try to get some stitching in. (when Rita took out the power, it was so flippin hot that time you couldn't hold a needle in your hand for the sweat! the power was out 3 days that time - yes, I know it was out much longer in other areas but we won't go there.
Naturally - hubby is heading in to work. I hope he can make it home at some point. I guess one of the advantages to having two grown sons still living at home is that at least I won't be here by myself all day.
I'll be back - soon I hope!
Everyone in Ike's path - stay safe!
Posted by TinaTx at 6:37 AM

I hope you don't lose power for too long or have too much damage!

My prayers are with you, that you and your family will be safe.

Be safe and maybe you won't lose power.

So sorry about your girl's weekend. I know how important they are and to have to miss is a crime.

Oh, goodness, I hope we don't lose power. If I can't be on the computer, in my garden, or reading, I am simply lost! And we live in a dark garden home. Few windows to read by!
Brenda

I hope that Ike doesn't cause you too much trouble - it sounds pretty scary from the news coverage we're getting in the UK :o/

My thoughts and prayers are with you. I hope you don't lose power for too long. The heat and humidity are awful! I remember when we lost power for several days after Claudette. The sugar in my pantry turned to a rock from the moisture in the air!
Blessings,
Lorilee

Hope you don't lose power. Seems you folks to the east got it a little worse than us!
You've just been presented The Smile Award, check out my blog for the instructions and icon!

Hoping that you're all safe after IKE! Been keeping up with Cable new's on the before and after. It sure doesn't look pretty!

If you did loose power, I hope it'll be restored sooner than later. What a difference there is, when we don't have this.

So sorry to hear about the NO girls crafting weekend~I'm pretty sure you'll all make up for it though, during the next get together.

Stay safe and let us know that your okay, just as soon as you can.

Take care, you are in my thoughts. Lovely job on the Red Thread piece.

I hope you are safe and dry ~ I am not sure exactly where you are but I found you from Linda's blog ~
hugs and prayers,
xoxo,
Lori