We had a visitor

We had an uninvited visitor named Ike.

When we first got up Saturday it wasn't raining yet but by daylight we were getting rain and some wind. 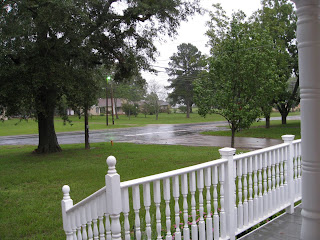 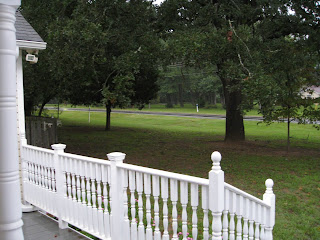 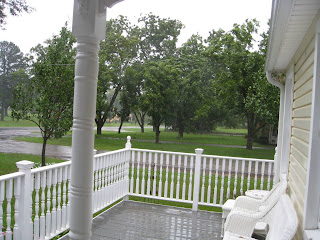 by 10:00 the winds were getting stronger. I couldn't get pictures of the gusts that were stronger than this without going outside and I wasn't going to do that! (I took this peeking out the front door - when they got stronger the winds pushed the door closed on me!) 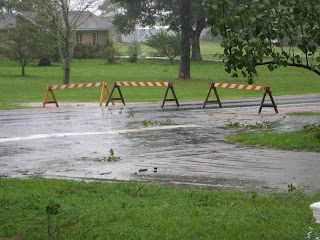 At some point, the city came out and put these up on the road in front of the house. There was a line down farther down the road, but you wouldn't believe how many people just went around these (I should have kept count) until it finally got so rutted out on both sides I guess they were afraid of getting stuck and started turning around. 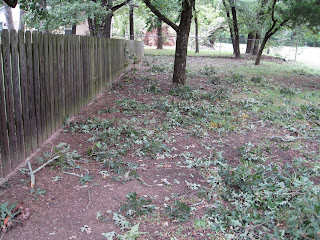 Our front yard about mid-afternoon. If you look in the distance at my neighbors yard you see this 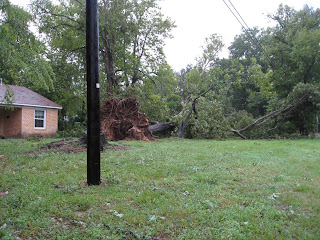 just behind that pole, you can see the stump from a tree she lost several years back. That one fell to the front and landed in the street. This one may be on the side street some but I didn't walk that far. (it started raining again) 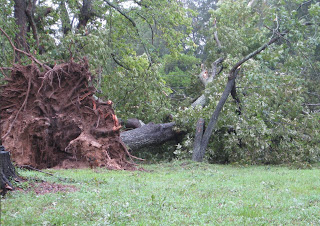 It did take down the phone line - we are still without a land line. You can see in some of the pictures that we have huge trees like this in our yard. I'm sure they are all about the same age and every time we have strong winds/rain, I'm afraid this is going to happen in our yard. She has been lucky that hers have fallen away from the house. 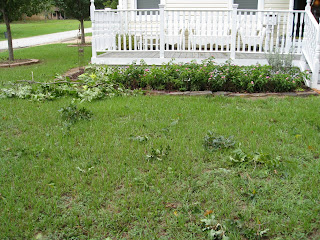 the other side of the front yard 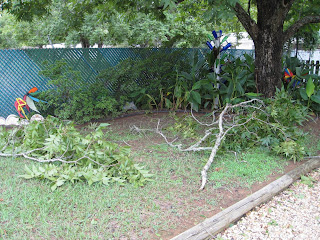 back yard beside driveway. I thought my flamingo whirly thing was close enough to the fence to be protected but he bit the dust. 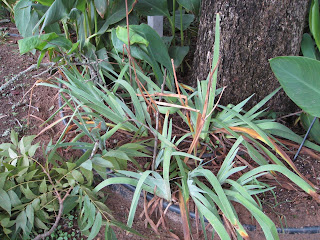 flower beds didn't fare well - most of the cannas were shredded so I just cut them all back. 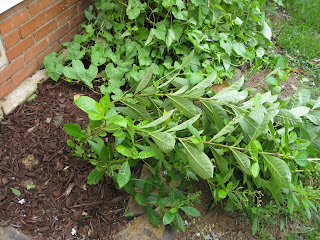 Blue butterflies didn't fare well either. We staked them back up - hope they survive (they still had blooms on them though!) 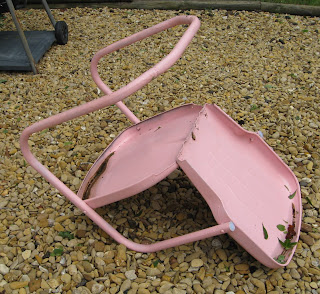 we put most of the yard stuff up as much as we can (not a lot of room in the garage since oldest kidlet has an apartment worth of stuff out there) all the metal chairs were behind the garage but it did catch this one. 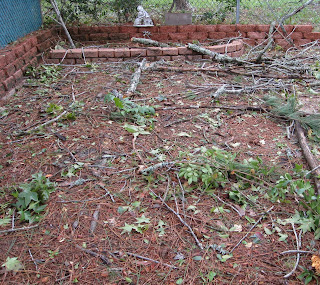 All in all, we fared pretty well. The power went off and on a few times during the day (so I kept the computer off all day) After the rain and wind were gone, at 12:30am on Sunday - that is when our power went off. Have no idea why, but it was back on when we got up yesterday so no real problem there. It blinked a lot yesterday but never went out, thank goodness!

While we were cleaning up all the debris from the yard, we had to watch out for these guys 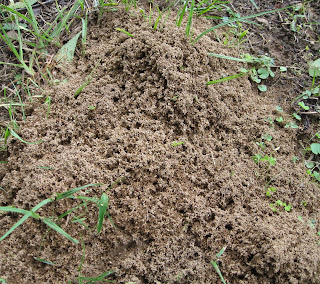 I don't know if you can see them if you enlarge the pic, but trust me, there are thousands of little ants in there. We have several of these in the yard. 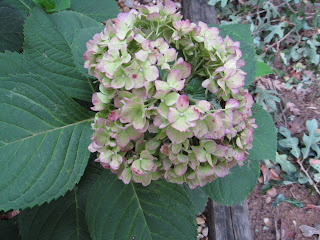 I thought it was amazing that my one hydrangea bloom is still on the plant. I may have to cut it and bring it in to dry.

I haven't ventured out to see anything around town, but I know there were lots of trees down and many people still are without power.

And for Rue - I decided to cook my peas Friday night, just in case we didn't have power on Saturday, at least we could have cold peas! 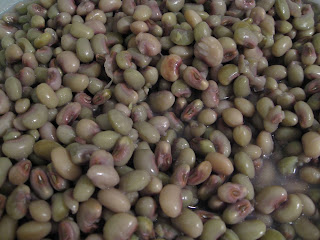 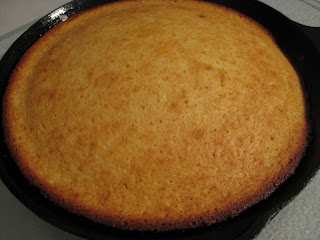 When we had power late Saturday afternoon, I cooked some cornbread to go with them - yumm.
So - we are trying to get back to normal today. Schools are closed here today due to power outages but since I don't have kids that young, that doesn't really affect me. I'll be heading in to work in an hour or so. I haven't heard if downtown has power or not. (if not, I'll be home PDQ)

I still can't believe we made it through with minimal power outage - ours usually goes out before the wind even thinks about blowing! We were really lucky.
Posted by TinaTx at 6:41 AM

Glad that you're OK and didn't suffer too much damage!

I'm so glad to hear you've emerged relatively unscathed from your unwelcome visitor!

Glad to hear you didn't get worse damage.. It sure looks bad for some areas in Texas. And as for the peas and cornbread.. Pass the bowl and slice me a wedge.. They look yummy.. any sliced tomatoes to go with it?

Great news for you...sad news for the neighbor...but at least your homes and yourselves are safe..
;-) Bo

Good to hear that you survived with minimal damage. Sometimes you lose power when they are fixing it somewhere else and you are on the grid or something like that. Sounds like Houston and Galveston were hit very hard.

Ready for some peas and cornbread. Pass it down.

I was worried about your conservatory....I am so thankful you and your lovely home are alright....
Hugs
Linda

I'm glad you are safe and sound. Still having power is a definitely a plus!
Blessings,
Lorilee

I'm glad to know you're safe...and those ants are really CREEPY!

I'm glad that you and your house made it through :)

Tina....thank goodness you made it through without too much damage....dinner does look yummy...any leftover:). hugs, Linda

P.S. Our family in Paris didn't have too many problems either.

Tina,
I'm so glad you are ok with little damage.

Wow, you got a lot more wind than we did! By today, you can't even tell it rained here.

Just got home from Cali and was wondering how you did - glad you made it through ok!!!!! Love, Esther

I'm glad you're ok...and glad that nothing bad happened to that big glorious porch. I love your porch with a love that borders on unhealthy! I so want a big porch.

I'm glad the damage wasn't too bad at your house! Thank you for making the peas for me :)

I still have never seen anything like them, but I'll bet they are tastey with that cornbread... yum!!

My family lives in Alvin and Clear Lake...sorta back to normal for them also. We lived in Austin and Houston area for years...our best solution found for ants is really easy. This needs to be done in the early AM when it is relatively cooler and the ants are closer to the surface. Fill a 2 gal bucket with boiling water and add a squirt of liquid dishwashing soap, and a couple of heaping tablespoons of fround cayenne or hotter pepper. Stir gently to mix, careful not to splash. Pour it into the mound. The soapy water clears the protective oils off their bodies and the pepper gets in the crevices and kills them. And before anyone screeches, no, I never felt bad killing ants, particularly fire ants. I've been bitten by them, I've had friends and family bitten and seen children bitten. Our last summer in Austin an older gentleman was killed by them when he ran over the nest with a lawnmower, so I have no problem killing them. It's an environmentally responsible way to do it, no poisons around for kids, animals or pets so....worked really well for us. You might have to repeat it a time or two to make sure you get the queen, but it's really effective.