As done as it is going to get 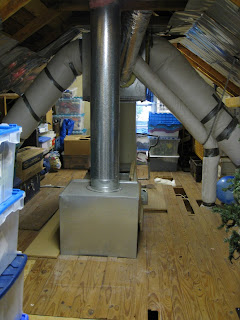 So, this is as good as the attic is going to get. At least now you can walk from one end to the other. There is probably still stuff that needs to go but we made a lot of progress! Now we can at least move around enough to work on replacing the floor with plywood!
A lot of it was just plain trash. Stuff we should have thrown away a long time ago. Those crates on the left are full of Christmas decor. I did not go through those as I didn't think there was much in there that would have made it to the garage sale pile anyway and I'll just go through those when it is time to decorate for Christmas. I'm not sure how many boxes there are all together - next time I'm up there I'll take a pic of just the Christmas stuff.
I did find things I forgot I had, things I knew I had but didn't know where they were and things I knew I had and had no idea they were stored in the attic - or why. Here are a couple of things that were up there that should have been down here in the cedar chest. (they have been washed and that is where they are now!) 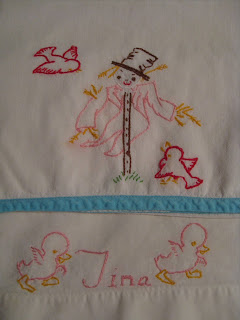 These baby pillowcases were mine. Mother does not remember who made them but I'm almost positive they were embroidered by the same person. I'm pretty sure they were made either by my grandmother or great-grandmother. 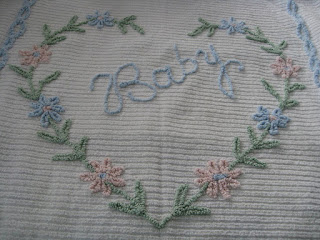 This is a crib-size bedspread. It was hubby's when he was a baby and it was used for my boys when they went from the crib to the toddler bed.
Yesterday I worked on my quilt top some then stitched - or rather unstitched - last night. Progress pictures to come later. I still have a few 'attic treasures' to share.
Hope you have a great Monday!
Posted by TinaTx at 7:19 AM

Well it all looks nice and tidy now! So glad you found some of your precious treasures. I bet you feel good knowing that now you can find all the stuff you need!

Bravo...now put a lock on that attic and lose the key where only you know where it is...so hubby can't start over up there.:-) Bo

Your attic looks quite nice and neat! You should see mine. The landlord we ended up buying this house from had some fool just throw in that cottony-like insulation. So every time you open the entry to the attic, which is the hallway, it sifts down on top of your head. Like a said, a fool. Both of them.
Brenda

I'm glad you were able to find those precious linens :)

OMGoodness Tina, the newly cleaned out attic looks absolutely stunning! Your hard work show's~how proud you can be!!!

Horray too, for finding the treasured keepsakes. I can't wait to see what other attic treasure's you have to share.

Glad to hear you are getting some quilting and stitching/unstitching done too. Ahhhh~bet it feels great to just sit and relax a bit.

You just have to much energy stored up! LOL

Wonderful job. The attic looks great. What fun to find little treasures along the way...sweet baby linens. Have a happy day...hugs, linda

Attic looks great. How long will it stay that way? Oh, the baby stuff is so wonderful for you to have. Don't think I have ever had any of mine.